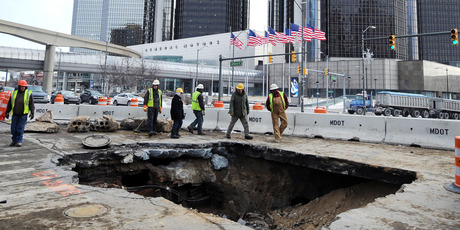 The UK seems to be suffering from a plague of sinkholes. In the past month alone a 4.5m hole has opened up on the M25, a 9.1m crater swallowed a car in High Wycombe and in Hemel Hempstead, homes were evacuated after a sinkhole 10.6m across opened up in a residential street.

Meanwhile, in the US, an even bigger sinkhole (some 12m wide and 6m deep) swallowed up eight rare cars in a Corvette Museum. Thankfully, none of these incidents caused any injuries – but the thought of the ground opening up without warning is still justifiably terrifying.

But what is a sinkhole and why does it seem that there are suddenly so many of them about?

What is a sinkhole?

A sinkhole is essentially any hole in the ground created by erosion and the drainage of water. They can be just a few metres across or large enough to swallow whole buildings. Although they’re often the result of natural processes they can also be triggered by human activity.

What are the different types?

There are two basic types, those that are created slowly over time (a cover-subsidence sinkhole) and those that appear suddenly (a cover-collapse sinkhole). Naturally, it’s the latter type that create headlines, but both varieties are formed by the same basic mechanism.

Sinkholes mainly occur in what is known as ‘karst terrain’; areas of land where soluble bedrock (such as limestone or gypsum) can be dissolved by water. With cover-subsidence sinkholes the bedrock becomes exposed and is gradually worn down over time, with the holes often becoming ponds as the water fills them in.

With a cover-collapse sinkhole this same process occurs out of sight. Naturally occurring cracks and small voids underneath the surface are hollowed out by water erosion, with a cover of soil or sediment remaining over the top. Eventually, as the hole expands this cover can no longer support its own weight and suddenly collapses to reveal the cavern underneath.

Why are there so many sinkholes now?

Most of the sinkholes we are seeing at the moment are at least indirectly created by human activity. They’re occurring just to the sides of human constructions where rain water has been concentrated on a particular patch of ground in the form of run-off from roofs and tarmac.

However, these local factors wouldn’t matter if it wasn’t for the wider picture. The South East (where most of the sinkholes have appeared) has not only suffered one of the wettest winters in recent decades, but is also natural sinkhole country – most of the bedrock is the soluble chalk.

How bad have we got it?

Despite the dramatic nature of cover-collapse sinkholes they’re not as dangerous as they look. Their effects are localised and once they’ve appeared they can be safely dealt with. However, this isn’t to say that sinkholes are safe by any means.

In 2010 one of the most devastating sinkholes in recent times hit Guatemala City. An area approximately 19.8m wide and 30m deep collapsed, swallowing a three-storey factory and killing 15 people. The sinkhole was caused by a number of factors including an influx of water from Tropical Storm Agatha and leakage from a local sewerage pipe.

In Florida last year a sinkhole also proved deadly after it opened up within a detached bungalow and swallowed the sleeping body of 37-year-old Jeffrey Bush. Bush’s body was never recovered from the 9.1m wide, 6m deep hole.

What about the rest of the world?

But even the example above is small compared with sinkholes from the rest of the world. The deepest we know about is the Xiaozhai tiankeng in China. Tiankeng is the local term for large sinkholes and translates literally as ‘heavenly pit’. This particular example in the Chongqing district is a staggering 662m deep and 626m wide.

Other notable sinkholes include Sima Humboldt in Bolivia, a crater 314m deep and formed from extremely resistant sandstone; the Great Blue Hole (above), a perfectly round hole in the middle of an atoll which is 124m deep; and Crveno Jezero in Croatia, a 530m deep sinkhole with nearly vertical walls.