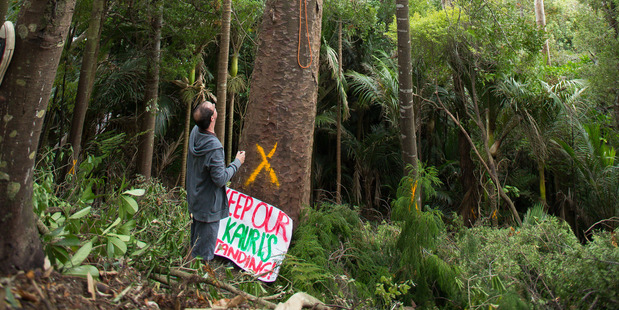 Residents upset with plans to axe a 500-year-old kauri in their Auckland neighbourhood have managed to keep the tree-cutters away – for now.

And their fight is gaining support, including from New York-based former Prime Minister Helen Clark.

About 100 people gathered at Paturoa Rd, in West Auckland’s Titirangi, early yesterday to protest the scheduled felling of the centuries-old kauri to make way for two houses that have consent to be built on the site. A neighbouring 300-year-old rimu is also due to be chopped down.

One protester nestled himself high on a kauri branch hours before contractors arrived about 7.30am.

Aprilanne Bonar, a community spokeswoman and the organiser of the Save Our Kauri group, said the climber, activist Michael Tavares, planned to remain there overnight.

Police officers served Mr Tavares with a verbal trespass notice authorised by the developer and owner of the site, John Lenihan, who has declined to talk to media.

Helen Clark, who now runs the United Nations Development Programme, also weighed in on the battle. On a photo of supporters standing in front of the tree, she wrote: “Extraordinary in this day and age that a permit would be given to fell a 500-year-old tree.”

At the site, residents and supporters were joined by members from Reweti Marae and mana whenua (guardians of the land).

Its a beautiful morning here in Titirangi. Get to 40 Paturoa rd to tell council they got it wrong. #saveourkauri pic.twitter.com/URqR9qBFeO

Member Chris Pairama, a long-time environmental activist, said it was an emotional time for those whose family – like his own – had been living in the region for generations.

“I find this situation horribly distasteful … there has been no community and iwi consultation.”

Naomi Singer, who has lived in the area since last year, said many in the community were outraged at the removal of a treasure. “This is a taonga and this is why we live in Titirangi – the trees, the lushness and the privacy. They just shouldn’t be taking down a 500-year-old tree.

New Lynn MP David Cunliffe said the Government’s changes to the Resource Management Act – which removed protection for urban trees – was to blame.

“The fact that a non-notified consent was granted without consultation even with the neighbours indicates that the weakening of the RMA has gone too far.”

Auckland Council, which has granted resource consent to build on the site and therefore approved the removal of the trees, said yesterday that it had no mandate to revoke consent.