Promoting NZ to the world. 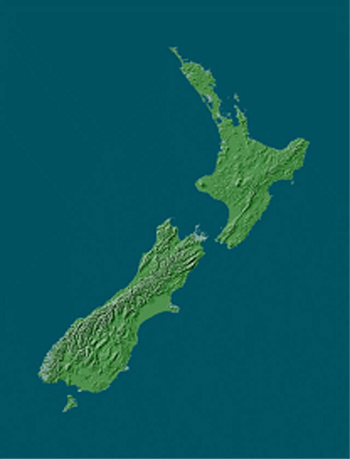 Promoting a small nation to the world which has such a variable climate, is no easy task.

holidays-in-newzealand.com have had a crack and have gone into some detail!

New Zealand weather tends to be variable because we are in the mid latitudes, it is very changeable, with a wind flow from west to east. The highs and lows of the weather system are carried along this flow, meaning the weather comes from the west.
Air from tropical areas is usually wetter than from the polar region and generally these two air flows do not mix. The air in New Zealand has blown across wide expanses of sea picking up moisture as it goes. Being such a long narrow country the furtherest point from the sea is no more than 145 kilometers. This means frequent rain is part of the New Zealand weather pattern.

Our mountains, especially the Southern Alps, are high enough to precipitate rain, so the west coast of the South Island is the wettest area.

On the eastern side of the mountains of course, there will be less rainfall, and these areas are much drier. In fact the Canterbury Plains often suffer from drought, while not that far away they are having excess downfall. These vagaries of weather in New Zealand can be very frustrating for our farmers!
Most of the North Island has rain for around 130 days of the year.New Zealand’s annual rainfall is anywhere from 640mm – 1500mm,depending on where you are,which suits our agricultural and horticultural industries.
The prevailing wind in New Zealand is westerly……. with easterlies prevailing only some months.
Wellington- nicknamed the windy city( although they deny it vigorously), has an average of 173 days of wind annually, where the wind gusts are over 60 kms per hour. This can at times impact on the ferry crossing Cook Strait,which can be quite rough. They will be postponed in extreme conditions.
However, Aucklander’s can also have their fair share of wind, as do most coastal areas.
Canterbury has hot, dry, nor ‘westers over summer, which means they often get the first warm sunny weather of summer, in New Zealand, often in November.
Best Places for Sunshine!

The sunniest places are Blenheim and Nelson at the top of the South Island, and Whakatane on the east coast of the North Island.

The rest of the Bay of Plenty, and Napier are not far behind for sunshine hours. The lovely weather enjoyed in these places makes them popular for New Zealander’s to live, and many have high numbers of retired people.However, most of New Zealand especially in the north get plenty of sunny days.
New Zealand weather in February is generally the most settled, although in the last few years this has not been quite as predictable as it used to be, with quite a lot of rain some years.2008 and 2009 have been the best summers in over 10 years and it has been just beautiful.Settled, dry, not unpleasantly hot or humid.Everyone but the farmers who are experiencing drought conditions,is happy.
What to Expect of New Zealand Weather in Winter

New Zealand weather is generally sunnier than many countries experience in winter, with relatively few thunderstorms. It depends where you are what frosts, if any, you are likely to encounter.

Central Otago, inland Canterbury and the Central Plateau of the North Island have the most severe and frequent frosts. Snow generally falls in these areas, as well as Dunedin.These areas are popular for skiing with mountains and ski fields attracting large numbers of tourists – both local and international.

Winter weather affects New Zealand’s roads such as the Desert Road in the central North Island, the Rimatukas out of Wellington, the Passes to the West Coast of the South Island etc which can be closed due to snow and extreme weather conditions.

Occasionally
Auckland never has snow, but does get the occasional hailstorm.
The New Zealand climate can be very humid, because we have regular rainfall, especially in Northland and Auckland. In the summer months, the temperatures are not that high – only in the 20’s degrees Celsius range, but the humidity can be over 90 % so it can be rather sticky and uncomfortable.
New Zealand weather tends to have sudden changes. The Far North is subtropical, but the South Island, especially inland can have winter temperatures as low as -10C.
Many visitors are surprised to find private homes in New Zealand rather cold in winter, especially in the north, as people don’t heat them as well as they do in colder climates. Commercial places such as hotels, motels, shopping complexes and offices should be nice and cosy.
New Zealand Weather Temperatures

Daylight Saving – You can expect daylight to last till about 9.00pm in summer. We have daylight saving in New Zealand which starts the last weekend of September when clocks are put forward an hour, and finishes the first weekend of April.

Fog Auckland and Wellington are prone to fog, which can affect flights at times.
Pollution While we have less pollution than many places with limited manufacturing and sea breezes, some cities do have polluted air. Christchurch gives air warnings for those with respiratory problems. Usually this is in winter when people are burning coal fires.
Seasonal Weather in New Zealand

Summer – December to February. The longest day is 21st December and Labour weekend – the last weekend in October was always the start of summer activities,including swimming in the sea! However, this tends to be a bit later these day.Christmas is outside if we are lucky, but the hottest most settled weather is usually February running into March.Autumn -March – May often has lovely settled weather. New Zealand native trees are not deciduous so you do not get pronounced seasonal changes in the north, but Otago and Hawkes Bay where there are a lot of English trees, has beautiful autumn colours.

Winter- June-August.If you are in the central North Island or the South Island you will experience winters similar to Europe with cold, frost,and snow.The northern part of the North Island has generally mild winters where a really cold day is 8-10 degrees.There will be plenty of rain and some wind.

Spring –September – November will have great displays of blossoms, lambs and calves in the paddocks and beautiful flowers in the parks and gardens. Christchurch city is particularly lovely in spring.The weather is often settled and it is a nice time to travel.November can be windy.