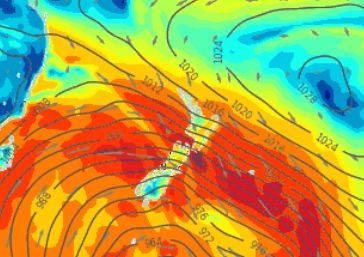 Sure, WeatherWatch.co.nz declared a stunningly early start to spring this year, announcing in late July that it had arrived – but nothing says “spring is here” like the predictably moody westerlies that hit us in the month of September.

Spring is the starter of life but to me if was personafied it would be a cross between a toddler in the terrible twos or the kid with teenage angst.  Either way, it’s predictably unpredictable.

The westerly belt of wind will arrive as early as this Friday – it starts of fairly tame, helping guide this cold southerly we’ve just had out into the Pacific Ocean and driving that air out of the valleys. This will reduce the chances of frosts next week.

During Saturday the recipe for windy westerlies in New Zealand is revealed – and it involves a large high north of NZ.  It’s this northern placement of the centre of the high – and the fact that it stretches west to east, – that means the strong belt of westerlies south of the high will cross directly over New Zealand.

On Saturday those winds build in the South Island.

By Sunday it’s central and northern areas who get the brisk west to south west winds.

Then next Tuesday and Wednesday sees a very large storm near Antarctica coupled with a big high to our north or north east and we may have severe north west gales blasting eastern and central areas – and with it, a lift in the temperatures into the 20s possibly for eastern NZ.

Westerlies dominate our weather for the next week starting from Friday.  Moody, changeable, sometimes warm sometimes cold, sometimes dry, sometimes icy and wet – these are the spring westerlies and they arrive tomorrow.

This article makes me feel good, thanks Phil. normally love a good ‘true, westerly season. Bring it on. Warmer air with humidity does me fine. I always look forward to it, no two days the same. As long as they don’t meet an S/SE. Sunday just gone anticyclonic ESE with pileus over the hill and us in a lenticular gap generated an ice cold straight 68 km/h downslope with a roll cloud. Spring usually sees downslopes & NW damming, so yep it is here. Some nice tuba kicked in with SW arrival this week, that is definitely a Spring signature here in Paekakariki … Cook Strait v the mountain winds. This year looks like it might be a cracker for windshear, it was spectacular on Sunday with mountain cirrus v altocumulus. Ah Spring the most rugged season of em all here, so frontal.