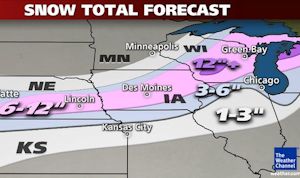 The Weather Channel named the storm “Draco”.  But for people looking to get an early jump on their holiday travels, they are probably calling this storm names that aren’t fit to “print”.

Blizzard warnings are in effect across a huge chunk of the central and mid-western United States.  Up to 30cm of snow is expected for parts of Nebraska and Iowa.  A huge part of Wisconsin could see to 30cm with parts of the south-western regions of the state seeing over 30cm.

Combine that with winds gusting to near 65 km/h and the result is whiteout conditions.  Some schools districts in Wisconsin are already being forced to cancel classes tomorrow.  Government agencies, including the National Weather Service, are recommending on travel Thursday (local time).

Air travel at the Minneapolis/St. Paul international airport in Minnesota is not likely to see major impact since this storm as it will be too far to the south.

The airports in Milwaukee, Wisconsin and Chicago, Illinois will like see significant impacts.  Strong winds and a combination of rain and snow will likely snarl things up at both hubs late on Thursday into Friday (local time).

The storm will move into the north-eastern US in time for the weekend.  Enough warm air is likely to be drawn into the system to keep snow totals down as much of the moisture will go to producing rain.  However, the combination of low clouds, rain and strong winds on Friday (local time) could cause significant air travel delays at the big airports around the north-eastern US.

All images/ The Weather Channel