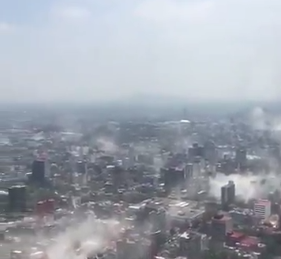 UPDATED 8:51am — A powerful Magnitude 7.1 earthquake has struck Mexico City, according to the USGS. Latest media reports say 44 people have been confirmed dead and it’s very likely that toll will rise based on the amount of damage.

The quake was 50kms deep and social media shows buildings collapsing in the city – a city that is home to over 21 million people.

There are reports of many buildings that have collapsed, some on fire and gas mains exploding.

The airport has also been closed due to multi level buildings that have collapsed and major damage to infrastructure.

The Associated Press (AP) says co-incidentally today’s quake struck on the anniversary of a powerful earthquake in 1985 that caused damage.

Reports are only just coming in but social media is already showing videos of buildings collapsed and on fire.

WeatherWatch.co.nz believes there could be a number of injuries and deaths with so many building collapses.

CNN has the latest news here on the quake