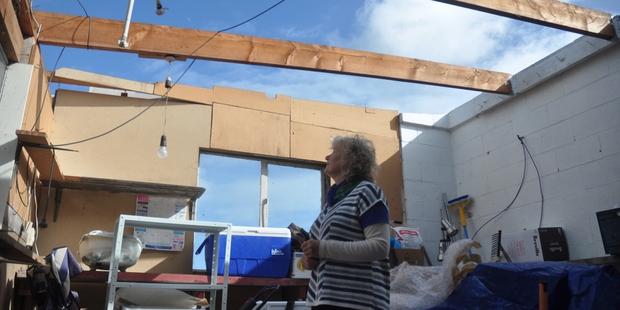 Cowper Street residents were today cleaning up the aftermath of a “phenomenal” wind that struck before dawn this morning.

What was thought to be a mini tornado hit about 5.25am damaging several properties from Cowper Street through to the Greymouth fire station.

Greymouth fireman John Walton lives at the Greymouth fire station and described the power of the wind: “Just a massive wind, a strong strong wind. Then it just stopped”.

“It only went for about five minutes, not even that really. It had been building up, but this wind was just phenomenal.”

he wind snapped the top off the Norfolk pine at the back of the station and threw it into a brick wall, yet a stack of chairs less than 10m away had not even budged, he said.

The fire brigade had been called just around the road to Cowper Street and only noticed the damage at their own site when they returned.

Cowper Street resident Shona Preston was one of the first hit when her garage roof lifted and blew into her neighbour’s car. It ended up 50m away on the road.

“It gave you a real fright. The poor old cat still won’t go outside,” she said today as she cleaned up her flat.

“I was sound asleep and the next thing you just heard this noise.”

–Image / Cowper Street resident Shona Preston stares up into the sky where her garage roof used to be. Photo / Greymouth Star–

She was shifting items from her garage, which was now exposed to the elements.

“We are lucky so far, it hasn’t rained. Thank God it is only things. Nobody got hurt.”

Her neighbours Peter and Judy Crawford were awoken by the same noise.

“There was a bit of a roar, then a load crashing noise then glass breaking,” Mr Crawford said.

That sound was the garage roof smashing into their vehicles, crushing the bonnet, window and roof of one.

The force of the wind was so that it pushed his van back several metres into their car.

Thank our Lord, God in heaven that nobody was hurt!! Mrs Preston, I hope your cat will be OK. Give her a lot of love and cuddles. God bless Greymouth and God bless NZ!!