Pockets of tropical-like rain coming for parts of North Island 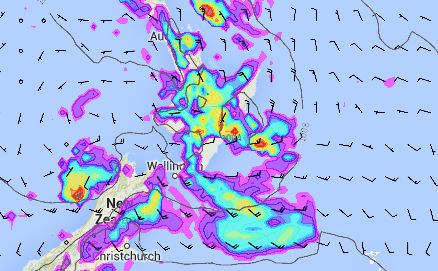 A low pressure system in the Tasman Sea is heading towards New Zealand and has already delivered torrential rain to parts of Queensland in recent days.

While Queensland is far more tropical than New Zealand this Tasman Sea low is tapping into a humid airflow over the Sunshine State and Coral Sea – meaning explosive tropical-like showers could form over the upper North Island across Tuesday PM, Wednesday and possibly Thursday says WeatherWatch.co.nz.

Head weather analyst Philip Duncan says hopefully the pockets of severe weather will do more good than harm. “The north is now drier than average and with record breaking November heat at the weekend in Auckland any rain will be welcome”.

But Mr Duncan warns that the incoming weather could be dangerous in pockets. “Whenever we have slow moving tropical fuelled showers we run the risk of localised flash and surface flooding, hail, severe thunderstorms and even a few funnel clouds which could lead to a small scale tornado or blast of damaging wind”.

“Often it’s a mix of calm drizzly low cloud, hot sunny spells and then torrential downpours for some areas. It will be a bit hit and miss but inland and northern parts of the North Island will be most exposed to this weather”.

WeatherWatch.co.nz says the rain clouds will bubble up in certain areas and it will be difficult to pinpoint exactly where in advance – as a slight breeze can blow development areas from one side of a region to the other before the main showers form.

Government forecaster MetService says a large chunk of the North Island has a moderate risk of severe thunderstorms on Tuesday – along with potentially damaging winds.

WeatherWatch.co.nz will have updates across the next few days on this low. It’s likely to reach the Pacific coastline around Thursday, ushering in a cooler change for the start of December in a number of regions – for some, cooler may simply mean “back to average”.