Plenty of warm weather about 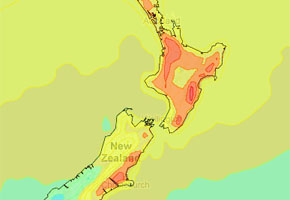 Well here we have it, plenty of warm weather about. Hope everyone is happy as through November many were hanging out for settled conditions. Being very non specific the weather over New Zealand is looking largely settled for the next 7 days.

Apart from that the weather does feel more like summer. High’s are likely to get upwards of 24 and 25 degrees about Auckland and the Waikato this weekend then after the mucky business in the first half of next week Thursday and Friday are looking very warm also. In saying that Tuesday and Wednesday are not likely to be cold, just cloudy and a bit dreary.

Saturday while sunny may deliver a cool northeasterly breeze along the South Island’s east coast, Sunday cranks up the warmth and then Monday is a hot one also. Once through Tuesday and Wednesday next week the heat begins to crank up again very much like the North Island but perhaps not till Friday.

well yea ww the strong warm north west winds of spring in chch well ,now sorta summer are starting to fire up and yes starting to pump some swell into taylors mistake in chch,cant wait till feb when our real swell for surfing hits.in new brighton,but dis decaying cyclone evan when it hits the north east coast of nz with swell will bring a good period swell to every surfer on the east coast of nz,and if you fish dont take your boat outi hope it a major weather event sipping back a can of beer after a days surf looking at fools who never checked the charts long as they dont die but some will this weather event, sad but thats humans dat dont check the weather fair dinkum, keep up the good service as i check daily at 5am on your site chur,