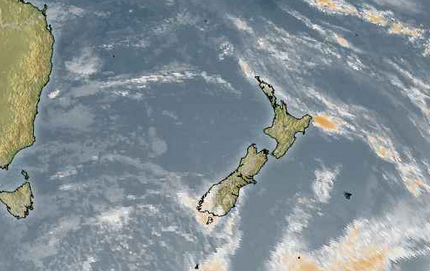 The west/southwest airflow which dominated the weather today will continue to influence both islands tomorrow – with a bit of a twist.

Southwesterly winds are looking strong again for Cook Strait, and may gust to gale force at times. West to northwest winds are looking brisk for Marlborough and southern Taranaki too, as far as Kapiti – and possibly even the East Coast.

It’s looking like cloudy periods in the west, with occasional showers moving in during the morning, while the east of the Island is looking much brighter – sunny and dry the order of the day.

Overnight, at this stage it’s looking like strong southerlies are heading for the capital, which could produce heavy showers with thunderstorms – and even hail(!). The risk of the really rough stuff increases the further east you go into the Wairarapa, but Wellington could well see some decent rain.

The West Coast is looking wet (again) – as heavy falls in the morning look like easing to showers by midday, as gusty northwesterlies change westerly.
Showers could well be heavy at times, with the risk of thunderstorms and hail around Hokitika northwards, depending on how the front behaves after it gets that far.

Down south, Southlanders can expect morning rain, but varying in strength and consistency, with the odd clap of thunder, too.
Otago will see morning sun turn into showers, with similar warnings – thunder and some patches of heavy rain could be on the cards, probably north of the Otago Peninsula.

Canterbury is looking at a mostly sunny day until early evening, with westerlies and building cloud in the afternoon, and a change to southwesterlies.
Showers may turn heavy in the afternoon/evening with thunder, and hail especially near the coast, but these will encroach further inland by nightfall.

And at the top of the island, chances of an early shower in Marlborough will disappear and give in to a mostly sunny day, with a few gusty northwesterlies. Late evening, however, will see a change, with the winds turning southwest, and eastern coastal parts of Marlborough can look forward to a miserable end to the day.

Has been quite dry in Christchurch for many months now, any likelyhood of substantial rain anytime soon?  We’ve had about 100mm in the last 4-5months which I guess is less than half the normal.

We have a few spells of rain in the pipeline but nothing significant in the next we while.

In saying that there could be a spell of heavy rain late afternoon / evening tomorrow when an unstable SW flow brews up some convective clouds. They can be hit and miss at times so other parts of Canterbury may get more rain then others, we’ll just have to keep an eye on that one.

Then on Saturday southerlies bring some patchy rain, mainly from afternoon.