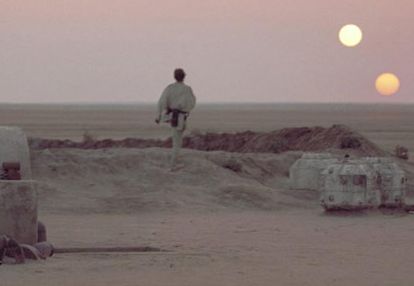 Luke Skywalker looks out over a desert dominated by two setting suns in an iconic scene from “Star Wars Episode IV: A New Hope.” But this isnâ€™t just the stuff of fiction. Now, astronomers have confirmed the first direct evidence that planets with two suns do exist.

Scientists at NASA and the Search for Extraterrestrial Intelligence Institute [SETI] are informally calling the newly discovered world Tatooine, as homage to Skywalker’s planet imagined by George Lucas.

The so-called circumbinary planet has been dubbed with an official name that’s much less interesting: Kepler-16b.

Unlike the tagline of the Star Wars saga, Tatooine is not located in a “galaxy far, far away,” it’s right in our own backyard – relatively – about 200 light years from Earth in the constellation Cygnus. Getting to Tatooine aboard a spacecraft traveling at light speed – 186,282 miles per second – would take about two centuries. (The closest star to earth outside our solar system is about 4 light years away.)

Using data from NASA’s $600 million Kepler telescope now orbiting the sun, a team lead by SETI’s Laurance Doyle detected the actual shadow of a planet as it crossed in front of its two suns – a scientific first. Before this discovery, astronomers could only infer that planets could circle two suns by looking at how the timing of the eclipses of those stars changed.

If the eclipses had happened at different times than expected, that would indicate that the stars may have a planet. But many other factors besides planets can cause such behavior, “so we really needed to see” the planet’s shadow crossing in front of the stars to identify it without a doubt as a circumbinary, Doyle said.

“When we first discovered it â€¦ I sent around a message, ‘Hey, you know guys, we should ask George Lucas if we can nickname this guy Tatooine,'” said Doyle, a former protegÃ© of famed astrophysicist Carl Sagan. “Suddenly and unexpectedly after years of looking for a circumbinary planet â€“ we got a beauty.”

The discovery opens up a whole new world of questions about the formation of planets, double-star systems and the way they work together.

A double sunset on the real Tatooine, Doyle said, would surpass even Lucas’ imagination. For someone standing on the planet’s surface, one of the suns would appear orange and the other red.

Inside the rooms of SETI and NASA, the word’s been spreading fast. “Everybody’s already referring to it in informal meetings,” said Doyle. “‘So, how’s Tatooine going?’ or referring to ‘Tatooine’s orbital period,’ or whatever.”

The idea that something that was science fiction in 1977 has been found in the real universe in 2011 could, Doyle hopes, inspire future scientists and astronauts.

But future space travelers may be disappointed to learn the real Tatooine probably isn’t home to Skywalker or any other life form. Doyle is highly doubtful that the planet could support life as we know it due to its size and distance from its suns.

Here are a few other details about the planet nicknamed “Tatooine.”

Kepler-16’s mysteries began to reveal themselves in March of this year, when Doyle and SETI colleague Bob Slawson found the first clues while working at SETI facilities in Mountain View, California. Further investigation showed the system contained two small stars and later, a planet circling the stars.

“It was really quite a team effort,” said Doyle. “Dan Fabrycky, at University of California, Santa Cruz, did gravitational confirmation calculations.â€ I asked him, ‘So, what did you get?’ He said, ‘99.99%, it’s a planet.'” Then after a few additional confirmations from other team members including Harvard-based Josh Carter, “we were like, that’s it guys. We nailed it. That’s the moment we nailed it.”

The discovery reminds Doyle of the work he did with Sagan at NASA’s Jet Propulsion Laboratory in the 1970s and â€™80s, analyzing data from the Voyager 1 and 2 probes to Jupiter and Saturn. Sagan took Doyle under his wing, encouraging him to pursue his doctoral dissertation based on Voyager’s data about Saturn’s mysterious rings.

Sagan, who died in 1996, would have celebrated this new discovery, Doyle suspects. “Being Carl, I think he might have used the term ‘elegant.’ A whole new kind of anything (in this case a planetary system) is what Carl just loved.”