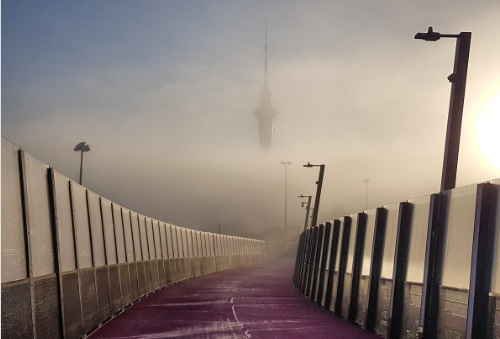 Australia’s largest centres have been impacted by fog lately, this morning it was Auckland to once again have a foggy start to the day.

Long cool nights, relatively mild ocean waters and calm weather have all helped create fog in eastern Australia and across parts of New Zealand in recent weeks, especially this past week.

There were still foggy patches over Auckland harbour/Waitemata Harbour as of noon but this afternoon foggy ares in Auckland have turned to cloud build-ups thanks to the morning moisture followed by daytime warmth and calm conditions. A shower is possible this afternoon or evening in the upper North Island.

It was a pea-souper in Hamilton and other parts of Waikato this morning too.

This is what I see when cycling on lightpath this morning #fog @WeatherWatchNZ @MetService @LocalAuckland pic.twitter.com/p2269g73RS

It’s apparently the first day of winter. … But we’ve been lighting the fire for ages. pic.twitter.com/jrPOz48cxc

The first day of #winter is no joke! I’m blue â„ï¸ @MetService pic.twitter.com/TmLxgYLRXE

Thick fog in Auckland at the railway crossing (was waiting for the barrier arms to lift) @WeatherWatchNZ @MetService pic.twitter.com/WKT3WvyypZ