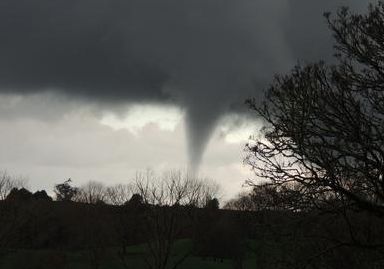 Updated – new photos – A tornado has been seen in the Waikato community of Paterangi, just south of Hamilton this afternoon.  While tornadoes aren’t in the forecast today, the unstable and slow conditions have lead to this funnel cloud and then short lived tornado.  It’s at the lowest end of the scale – likely an EF0 tornado – which can still lift pieces of roofing iron and break branches.

It was caused by a thunderstorm that moved through from the Tasman Sea.

“The tornado was on the ground for about 10 minutes”  wrote WeatherWatch.co.nz reader Colin Krippner, who took the photo and sent in to us.

“Today’s weather excitement as seen from Ngahinapouri School at around 3:00pm as the kids were heading home” – wrote Dave Moran who uploaded this picture.

Head weather analyst Philip Duncan says funnel clouds may be spotted over the next couple of days along with short, sharp, squalls, which are similar to tornados but don’t spin – instead it’s a short blast of straight line wind which can cause similar highly localised damaged.

MetService has no mention of tornadoes in any of their severe weather outlooks today or tomorrow.

“This looks like a bit of a one off as the north of New Zealand is still very much in a humid, mild, pool of unstable air – overnight it becomes more unstable but the air will get much colder and that limits the chances of further tornadoes” says Mr Duncan.

WeatherWatch.co.nz says the chance for further tornadoes in western New Zealand is deemed as low, but can’t be 100% ruled out due to the huge size of the wintry blast moving in.