Photos (10) – View of storm from above the clouds 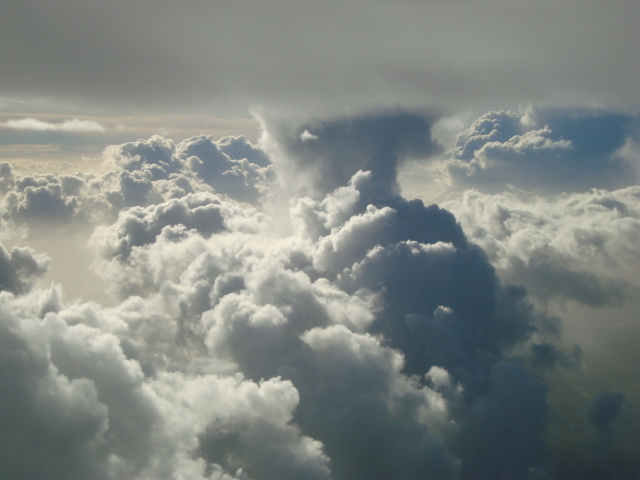 A unique view of snow clouds, thunderstorms and squalls taken earlier today on a flight from Christchurch to Auckland by our head weather analyst Philip Duncan.

“From the ground the clouds look hazy and fairly unimpressive…but from the sky it’s like flying into the tropics”.

Phil says the flight was a “bit bumpier than usual” but overall a fairly smooth trip with limited in-flight services due to the turbulence.

“We took off from Christchurch under clear skies and even frosts.  As we climbed over the Kaikoura ranges the snow clouds appeared”.

“Then as we moved over the North Island the turbulence picked up and the cloud was thick, with towering thunder clouds and squalls popping up every 50 to 100kms.  As we approached north Waikato and south Auckland the clouds were far more spectacular…the photos really don’t do them justice”.

This photo is actually in focus…this is the top of a large snow cloud over the ranges around Kaikoura.  Similar looking clouds have been spreading over the Canterbury Plains from time to time across the weekend.

Into the North Island now and a thunderstorm lies just near Kapiti Island.

More squalls further up the coast towards Manawatu – in fact a wall of them.

Flying between the thunder clouds… coming in over Waikato to land in Auckland, the plane gently weaved around these towering clouds.

Like something from the tropics…dramatic clouds towering high into the sky as we come into land.

As we approach Auckland Airport the clouds thin out and the plane drops fairly quickly through a gap.

Coming in to land at Auckland and suddenly the clouds don’t look so impressive…this is because the base of the clouds is flat and wide…so from underneath looking up, it appears fairly flat.  It’s not until you fly above that base that you can see just how tall the clouds are.  On satellite maps these tall clouds appear as small white roundish blobs (or orange on our satellite map to the right).

Taxiing off the runway as another jet takes off.  The huge seas off the west coast have put a lot of sea spray/salt in the air around Auckland, which is why it looks so hazy.  It’s also the reason why it appears grey and gloomy in the background here, mixed in with a few clouds.

Nice series of photos there Phillip, I like them 🙂

Quite similar to many flights I’ve had from Chch to Auckland. Amazing how much cloud seems to sit over north Island when-ever I’ve flown north yet Canterbury is so often cloud free. Probably a mixture of our relatively high sunshine hours and a little bit of co-incidence. The Alps certainly make a difference – especially at the moment with the roaring forties…

Thanks for sharing those photos, really impressive, neat to see them from another perspective. Don’t think I would be keen to go on a plane with those clouds but I am a bit of a whimp at anytime.

Lovely to see clouds from a different angle Phil. The cumulus were very tall at times in Auckland. Managed to resist taking an image 🙂 Last night’s international flights enjoyed a bumpy Auckland approach. With tail wind from OZ the planes made good time,landing early.