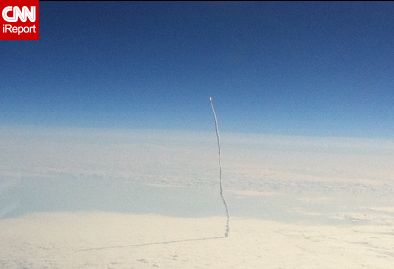 American Airlines pilot Lorriebird was doing her regularly scheduled flight from Miami to Montreal on Monday when she saw space shuttle Endeavour lift off from below. She says her plane was the closest airliner in the sky when it launched. ‘Who gets to look at this thing from above when it launches? That very last one (photo) is almost like saying farewell to the Endeavour. It almost looks like it is saying goodbye.’  – CNN iReport producer

From the photographer:  “I am an airline pilot and today was in the right place at the absolute perfect time. We were at 37,000 feet and were the closest commercial aircraft to the launch site at liftoff. Truly an amazingly lucky view of a lifetime!”.

Thank you to Lorriebird for sharing this great moment.