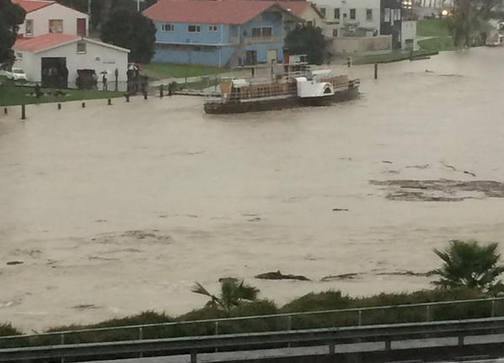 A civil defence emergency has been declared in Wanganui.

Waitotara township has been advised to evacuated this evening due to rising river levels and the prospect of flooding after today’s heavy rain.

Mayor Annette Main reports some people will be asked to leave their homes.

She is urging those people to listen and leave as soon as possible.

The Government has offered Whanganui help should it need it.

Civil Defence Minister Nikki Kaye reports the state of local emergency enables about 100 people living near the Whanganui River to be evacuated.

She has said civil defence emergency management responders, including emergency services and the army, are supporting the evacuations.

The Ministry is monitoring the situation and is ready to coordinate support if necessary.

Kaye adds she will be regularly briefed through the night, and her thoughts are with everyone affected.

Elderly neighbours’ late model Citroen down at our corner. In their 80s, they had to escape out a window. pic.twitter.com/rBFkYHIe80

Low-lying parts of the Manawatu town of Feilding are under water today.

Homes have been evacuated in Queen Street, where floodwaters are lapping at the doors of houses at the south end.

Manawatu mayor Margaret Kouvelis said residents are being kept warm and happy with their pets, at the town’s evacuation centre.

There’s been no let-up in the rain but there’s no wind, so the rain has been driving straight down for more than 24 hours.

Wash out at Waikawa Bridge near Otaki…huge repair job to get State HW One going again pic.twitter.com/KaqIlGYYfd

It means the only north to south route open is State Highway 2 between Wellington and Hawke’s Bay.

“What we’ve got here is the whole bottom of the North Island, Wellington is effectively cut off from State Highway One to the north, so the only linkage is through the Wairarapa and that can be very disruptive.”

There’s also no longer a detour available for the closed section of State Highway 1 between Bulls and Hunterville.

The Transport Agency is asking people not to travel unless it’s essential.

Power has been temporarily restored to 4500 Whanganui properties after floodwaters earlier inundated a substation.

But Powerco are warning customers it would have to be switched off again for about four hours this afternoon to clear debris and trees from high voltage lines affecting about 3000 customers in the Westmere, Kai Iwi, Whanganui, St Johns and Brunswick areas.

A small number of people have voluntarily evacuated their homes.

Waikawa Stream Bridge has been damaged in the flooding. It means State Highway One is closed both north and southbound at Manakau near Levin.

The New Zealand Transport Agency is hopeful it can reopen the Waikawa Stream Bridge at Manakau on State Highway 1 later today.

Getting some crazy pictures of the Whanganui river… Anyone with first hand account?? http://t.co/vmB66Xv1lS pic.twitter.com/FaVs4QgAHK

Inspector Marty Parker said even though it’s the weekend, the road carries a lot of traffic.

“We’ve still got commercial vehicles, trucks going through, tourists going through, so they’re going to have to look for alternative routes or wait it out for the next couple of days.”

Drivers will have to use State Highways Two and Three instead.

The bridge at Ringawhati Road in ÅŒtaki has been washed out, and the water main has been severed – the council says a number of households may be without water.

Residents are also urging people to check on their neighbours.

The clean-up of the New Plymouth CBD has been going well and it will be business as usual tonight, with resteraunts, hotels and other entertainment venues open.

People are being advised to avoid waterways in New Plymouth, after heavy rain has caused raw sewage to overflow.

Water and Wastes manager Mark Hall says people shouldn’t be swimming, surfing or collecting shellfish, or have any contact with local streams.

The stormwater pump station at Waitara has also been activated, and is pumping water out of the town centre.

Huatoki Plaza in New Plymouth is closed because of flooding.

Wanganui District Council are keeping a close eye on the town’s waterways as catchments from the Whanganui River are rising heavily.

Evacuations this morning in Whanganui, where slips are threatening seven homes.

The council’s emergency centre has been activated.

“We’ve advised people to secure any property, make sure their pets are okay because properties that back onto that stream are likely to be flooded or already have been flooded.”

Emergency Manager Matthew Smith has said the Red Cross is on hand at homes threatened by slips in Putiki.

“Putting them into a Civil Defence welfare centre that we’ve set up, basically so we can get them out of the rain and keep them warm.”

Matthew Smith said there’s also flooding on Anzac Parade in the city, and in the Peat Park area.

“Rain was predicted for the rest of today, and of course with the ground already sodden it won’t take much more rain for slips to carry on through the day.”

The Matarawa Stream is expected to reach 11.3 metres after six o’clock tonight. The Council has evacuated 14 houses so far and is set to make the next evacuation decision later this afternoon.

4500 customers are without power in Whanganui, because of flooding at a substation.

Another 360 properties at Whakamara in South Taranaki were cut off last night.

A slip on the Tangahoe Valley Road is preventing workers from accessing the network and making repairs.

Wanganui Council’s Cass Alexander has asked people need to stay indoors out of the water and not head out in their vehicles to look at flooding.

She says they would like to hear from people who come across slips or more flooding – their number is 06 348 0103.

The heavy rain is easing in the central North Island, but MetService is warning the bad weather is heading north.

Another 70 millimetres of rain is possible in the northern Tararua Range, Horowhenua and Taranaki today, and 120 millimetres could fall in the central North Island high country.

Up to 150 millimetres is likely between now and early tomorrow in eastern Bay of Plenty and Gisborne.

Great the Army has been called in for sandbagging in Wanganui.