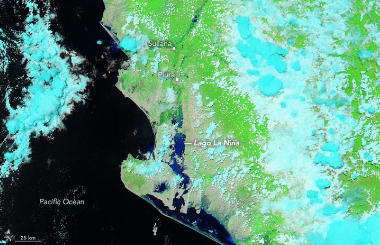 Peru’s rainy season has been devastating this summer. Hundreds of thousands were left homeless and dozens died in floods that left behind an estimated $3.1 billion in damage, according to the Los Angeles Times.

Tourism has plummeted because at least 50 archaeological sites were damaged by the flooding, Reuters said. Across the country, more than 150,000 homes and businesses have been flooded, the L.A. Times added.

“I have lost my grocery store and my house, which no longer exists,” Chongoyape resident Mariano Carreras told the L.A. Times. “My children have no clothes to wear, and the flood took away all their school books. We are desperate and have nothing. Who will help us?”

NASA has provided a view of these floods from space, thanks to the Moderate Resolution Imaging Spectroradiometer on NASAâ€™s Aqua satellite. In the animated image above, NASA paired two photos to show just how swollen the country’s waterways became after recent floods.

First, focus toward the middle of the photo at the Lago La NiÃ±a. In the image captured a year ago, the lake is its usual size and fully within its banks. But in the image taken a week ago â€“ the second half of the animated image â€“ the lake is dramatically larger and has taken over much of the land around it.

You’ll also notice how much the land has greened in the photo from March 23 â€“ a sign of persistent wet weather in recent weeks.

According to NASA’s Earth Observatory, the two images were taken in false color, which brings out features of the surface, like dry land and waterways, in more brilliant shades.

The most recent round of flooding in Peru came from heavy rain that persisted from March 19 to 23. On March 20, some locations reported stunning rainfall rates as high as 5.4 inches per hour.