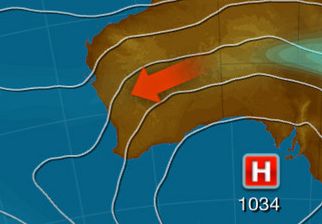 The past year and a half has been an especially hot and dry run for Perth. Even though the city is used to baking hot summers, the recent run has been one for the record books.

2010 was the second driest year on record for Perth, with only 503.8mm in the official gauge. This is well down on the 790mm average and only a little more than the record year of 2006, when 467mm was recorded.

This year has picked up where 2010 left off. While January rainfall did climb above average, February and March remained desperately dry. The only rainfall through these months was 0.4mm on the 1st February. Additionally, March was the hottest on record, with an average maximum of 31.9 degrees, breaking the previous mark of 31.8 in 1978.

We are also in the midst of record-breaking run of days above 30 degrees. If the city hits a top of 31 today as expected, it will be the 13th consecutive day above 30, which will be a new autumn record.

In all likelihood, this record will stretch to at least 16 days, with a significant change not due until mid week. Temperatures are expected to soar into the mid 30’s on Tuesday, before a front brings cooler winds and a few showers on Wednesday night.