Perfect weather – but will it last til New Years’? 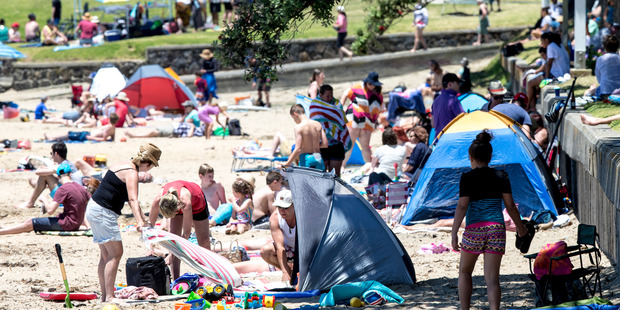 Most of the country has experienced near perfect summer conditions for Boxing Day. But the jury’s still out on what the weather will be doing for New Year’s Eve.

WeatherWatch analyst Philip Duncan said a large high was sitting over the centre of New Zealand, bringing sunny, settled conditions to most of the country.

“Finally it feels like summer,” he said. “For some people perhaps it’s a shame that it didn’t arrive 12 or 24 hours earlier but … at least we’ve got a beautiful weekend, mostly sunny and dry everywhere across New Zealand.”

Waikato was the North Island hot-spot today, with a toasty 26deg in Hamilton that was likely to feel more like 30deg due to the still conditions.

It was 25deg in Auckland and 19deg in Wellington, while inland parts of the South Island were also hitting the mid-20s today. It was 25deg in Wanaka, 24deg in Blenheim, 21deg in Dunedin and 20deg in Christchurch.

“Unfortunately, it’s the perfect recipe for sunburn because it’s not overly hot and you’ve got clear skies,” Mr Duncan said.

Things would remain largely dry on Monday and Tuesday, but the forecast from Wednesday onwards became complicated.

“We’ve got three things going on: there’s a high over Tasmania that’s trying to reach us by New Year’s Eve, there’s a cold front moving up from the Southern Ocean and in towards the South Island, and there’s a tropical cyclone around Fiji,” he said.

The cyclone would not hit the country but it could bring wet, cloudy, humid weather to New Zealand for New Year’s Eve.

It was yet to be seen whether this or the Tasman high would prevail to see in 2016.

“There’s a good chance that the high will come over like a bulldozer from the Tasman which just pushes everything out into the Pacific,” he said. “Then it’ll probably settle down and become summer-like again.”

Had a wash out …..Why should only the farmers and croppers SUFFER!!!!!!!!! all the time