Peak of the hurricane season? – yeah, whatever! 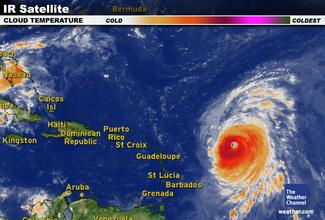 The reason behind no hurricane formation

Many people have asked Weather.Com’s Dr. Lyons why the hurricane season has been so quiet in 2009.  He exclaims that colder ocean water temperatures is definitely NOT the reason.

In fact, water temperatures are warmer than average across the tropical Atlantic, Caribbean Sea and Gulf of Mexico.

So why, after all the hype in August, have things gone quiet?

The primary answer for the slow hurricane season is found high up at around 35-45,000 feet in the upper portion of the tropical atmosphere.

They are the subtropical ridge (STR), the tropical upper tropospheric trough (TUTT) and the subequatorial ridge axis (SER).

The STR usually has weak winds along its axis and thus is a low wind shear zone, but it is also associated with sinking air and is not typically favorable for hurricane development. The STR is NOT FAVORABLE for tropical cyclone development.

On the south side of the TUTT axis, west or southwest winds are strong creating high wind shear. The TUTT is NOT FAVORABLE for tropical cyclone development.

Finally, we have the SER. It is always found south of the TUTT axis. The SER exhibits light winds along its axis it is a ventilating axis of high pressure that favors rain and thunderstorm development. The SER is FAVORABLE for tropical cyclone development.

Looking at the above graphic, the placement of these three features during the 2009 Atlantic hurricane season is very unusual.

The SER has shifted so far south it has either been located over northern South America or has been completely missing.

Without the SER, tropical cyclone formation will be minimal at best.

Additionally, the Caribbean Sea and Gulf of Mexico has been dominated by either sinking air (little t-storm formation) – the STR – or strong westerly winds – the TUTT – that shear or tear apart any potentially developing tropical cyclone.

There are at least three possible reasons for this unusual upper-air pattern, some or all of which may be to blame this 2009 hurricane season:

2) El Nino. It causes the Atlantic SER to be weak, displaced south and east of its typical position or missing completely.

3) Below average showers and thunderstorms over southern Central America and northern South America that have not been able to form or maintain themselves.

Atlanta – home base of Weather.com

The President’s action makes Federal funding available to affected individuals in the counties of Cobb, Cherokee, Paulding and Douglas. More counties may be added to this declaration later.

Georgia’s Gov. Sonny Perdue’s office had asked Obama to declare an emergency in 17 Georgia counties and the governor said the request covering the other counties is still pending.

“The recovery is just now beginning,” Perdue said in a statement. “We have a great deal of work to do and I appreciate President Obama’s approval of the disaster declaration. Low-interest loans from the U.S. Small Business Administration will also be available to cover residential and business losses not fully compensated by insurance.”

Vice President Joe Biden will visit the Atlanta area on Friday to inspect and survey the flood damage.

Biden will also meet with families affected by the floods, the White House announced.

We’ll have more details on this development when and if they unfold.