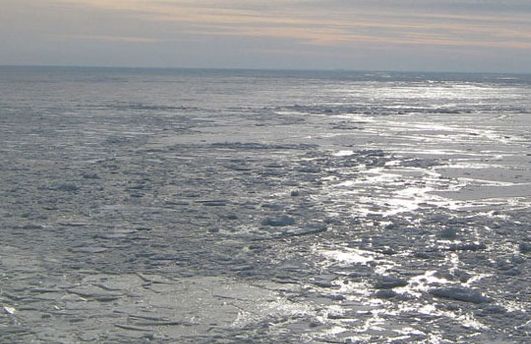 STOCKHOLM (AP) – A passenger ferry with nearly 1,000 people on board returned safely to the Stockholm harbor early Friday after having broken free from heavy pack ice that had trapped it for hours in the Baltic Sea, officials said.

Interactive map: Where is the Baltic Sea?
Dozens of other ships and boats had also been stuck as gale-force winds built up large ice masses along the Swedish coastline.

Ice breakers helped release the ferry Amorella at the edge of an archipelago north of Stockholm. Rescue helicopters and military hovercraft had been placed on standby to evacuate passengers if needed. No one was injured.

“It arrived in the port during the morning,” sea rescue spokeswoman Christel Englund said.

The Swedish Maritime Administration said the Amorella had 753 passengers and 190 crew on board. The 10-deck ship belongs to Viking Line, which operates Baltic Sea cruises between Sweden and Finland.

Heavy ice cover is common during the wintertime in northern parts of the Baltic Sea. But the ice rarely gets thick enough in the Stockholm archipelago to trap powerful passenger ferries like the Amorella.

“You have to go back to the mid-1980s to find a ferry of that size getting stuck,” said Johny Lindvall, who manages the maritime administration’s ice breaker service.

The Regal Star, a cargo ship with 56 people on board, was set free early Friday. Three other ferries that got stuck in the ice in the archipelago were able to break free on Thursday.

One of those ships, the Finnfellow, collided lightly with the Amorella when the ice pressed the two ships together, but there was no major damage to either ship, officials said.

About 26 cargo ships were awaiting help from ice breakers in the northern parts of the Baltic Sea, but the situation was under control, officials said.

“Things are returning to normal,” Lindvall said, adding that ships in those areas often request help from tough-hulled ice breakers during the winter.

Mats Nystrom, a passenger on the Amorella, told Swedish broadcaster SVT that there was no panic on the ship.

“The atmosphere is calm so there is no danger in that sense,” said Nystrom, who is a sports presenter for the network. He said the most dramatic event had been when the two ships touched.

“Suddenly in the loudspeakers there’s a voice saying that all passengers must immediately move to the front. Of course at that moment the passengers got worried and wondered what was happening,” Nystrom said.

The maritime administration said the ships had ignored warnings about the icy conditions.

“Normally we can handle this type of obstacle,” Viking Line CEO Jan Karstrom told SVT. “But in this case the wind is unfortunate. It’s blowing toward land and it means that (the ice) is packed more and more against land.”

weather.com: What does the Baltic Sea look like right now?  We’ll let these images speak for themselves.

Check out these twitpics recently taken during the past week on this frozen sea.