Parts of Queensland brace for heaviest rain since Cyclone Debbie 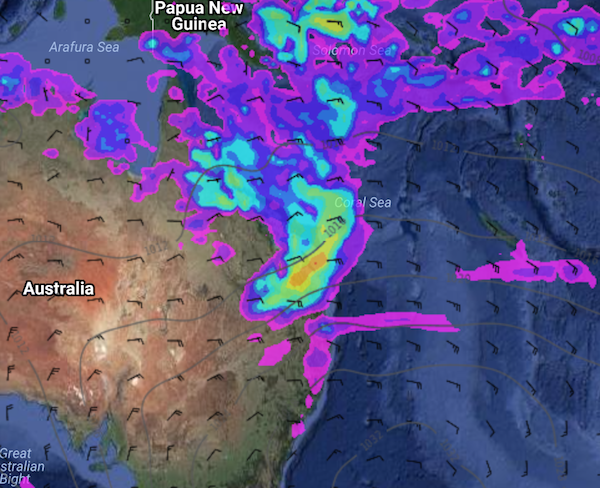 A week of rain and thunderstorms are about to soak central and eastern Queensland, delivering the heaviest rain since Cyclone Debbie in some areas.

A high pressure system moving slowly over the Tasman Sea will direct moisture-laden easterly winds into a stagnant pool of upper-level cold air above Queensland during the next week.

As the warm, moisture-laden air rises into this upper-level cold pool, thick clouds will tower over the state’s central and eastern districts, producing days of rain and thunderstorms.

Widespread weekly rainfall totals of 50-100mm are likely to stretch from the Peninsula down to the NSW border and inland to the Central West District.

The heaviest falls will occur along the coast and adjacent inland, where weekly totals of 100-300mm are likely and some pockets could receive more than 400mm.

Many river catchments across central and southeast Queensland have not seen this much rain since Cyclone Debbie traversed the state back in late March.

The Mackay and Rockhampton regions could see 100-200mm during the next week. This would be the highest weekly total since Mackay Airport’s 613mm and Rockhampton’s 189mm in late March.

Weekly totals of 100-300mm are a good chance along the state’s exposed southeast coast, most of which will fall between Saturday and Monday. This would also be the most since Debbie and could trigger flooding.

This event may produce both flash and riverine flooding. Keep up to date with the latest flood watches and warnings here: http://www.weatherzone.com.au/warnings.jsp