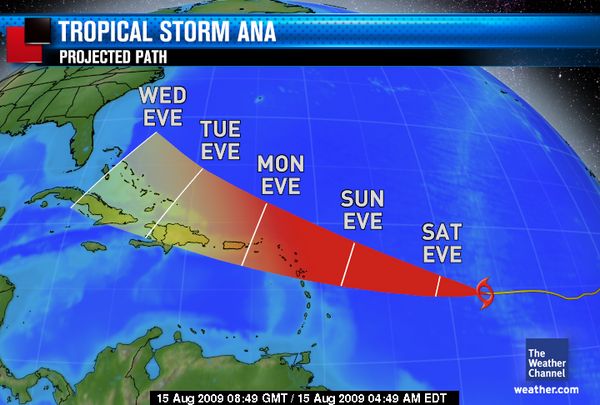 Tropical Storm Bill has formed in the east-central Atlantic about 1200kms west-southwest of the Cape Verde Islands.

Tropical Storm Bill is still consolidating and will move westward over the open tropical Atlantic over the next few days, steadily gaining strength.

Tropical Depression Two reformed in the Atlantic last night, and has now strengthened to minimal Tropical Storm Ana. This makes it the first named storm of the 2009 Atlantic Hurricane Season.

Ana is located about 1500kms east of the Leeward Islands. Maximum winds are near 65km/h

Ana is battling some westerly shear. The thunderstorms are off to the east of the exposed center.

The northern Leeward Islands, Puerto Rico, Hispaniola, Cuba and south Florida all need to monitor the progress of Ana.

In the western Atlantic, a tropical wave and associated surge of tropical moisture are moving away from Hispaniola and the Bahamas, across Cuba and southern Florida, and the eastern Gulf. Breezy conditions along with showers and thunderstorms will likely impact this region, but upper-level winds remain unfavorable for any development at this time.

This surge of tropical moisture will impact parts of the Southeastern states this weekend, bringing increased chances of showers and thunderstorms.

Guillermo rapidly strengthened overnight and is now a Category 3 hurricane.  Environmental conditions are forecast to become less favorable this weekend, and therefore it should soon begin a weakening trend.

Guillermo is not expected to threaten any land.

A couple hundred miles west-southwest of Guillermo, the remnant low pressure from Tropical Depression 9E is still being watched for regeneration.