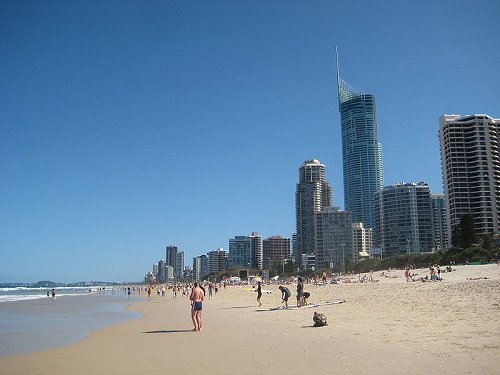 We’ve noticed in recent months that readers have been getting in touch from across the Tasman and especially from Brisbane, the Gold and Sunshine Coasts,Sydney and Melbourne.

With so many New Zealanders now living there and with a number of Australians living here too we’d thought we’d have more Australian weather information posted online.

Today it’s beginning to hot up again with Melbourne likely to climb into the low thirties, Adelaide feels the heat with a top temperature of 35 degrees and Perth remains boiling and expecting the mercury to hit the low forties yet again.

On the east coast it’s looking to be a pleasant day in Sydney under partly cloudy skies and 27 or 28 degrees the high while Brisbane and surrounding areas are looking at sou’ east winds delivering showery spells but still in the high twenties with plenty of humidity.

The long range forecast for the Gold and Sunshine Coasts isn’t looking overly bright for the next week as onshore winds will deliver some shwers from time to time with the chance of a thunderstorm.Still though there should be plenty of sunny spells and the mercury sitting up in the mid to high twenties during the day.

Sydney also sees the risk of a shower from tomorrow onwards however it’s looking just to be a chance rather than a guarantee with temperatures between 24-26 degrees over the next week.

Melbourne fares a lot better with temperatures of 30 degrees plus likely over the next week with plenty of susnhine. Early next week could be even hotter and 36/37 degrees a possibility.