Home > News > Overnight heatwave in the US, as morning...

Overnight heatwave in the US, as morning heatwave greats Europe

It’s supposed to be coming up to the coldest part of the night in the central and southwestern United States – but right now parts of the Southwest are at 36 degrees and Texas up to inland Canada, as of 4:30am their time, are up to 29 degrees.

Meanwhile in Europe the heat is already hitting. By 10am areas just north of London were approaching 30 degrees. Across the Channel other European nations are sweltering in the mid-30s as of the 11am hour. And yes, Celsius.

Even in central Canada, centres around Winnipeg, Manitoba are hovering near 30 degrees as of 4:45am their time. Sunrise is just an hour away. Winnipeg’s average high in July is actually colder than it is now, at 24 degrees – and the overnight lows, even in mid-summer July, drop down to 14 degrees on average.

The USA/central Canada heatwave is a classic Gulf of Mexico southerly current of air straight into the central and southwestern USA, then up through central USA into central Canada (Manitoba). It’s very much like when we get a direct northerly from north of Fiji in the middle of summer…just as humid, but even hotter.

The European heatwave is being caused by a large high to the east, pushing hot inland air across western Europe.

Here are a few snap shots (as of 9:45pm NZT), thanks to Wunderground for the data. 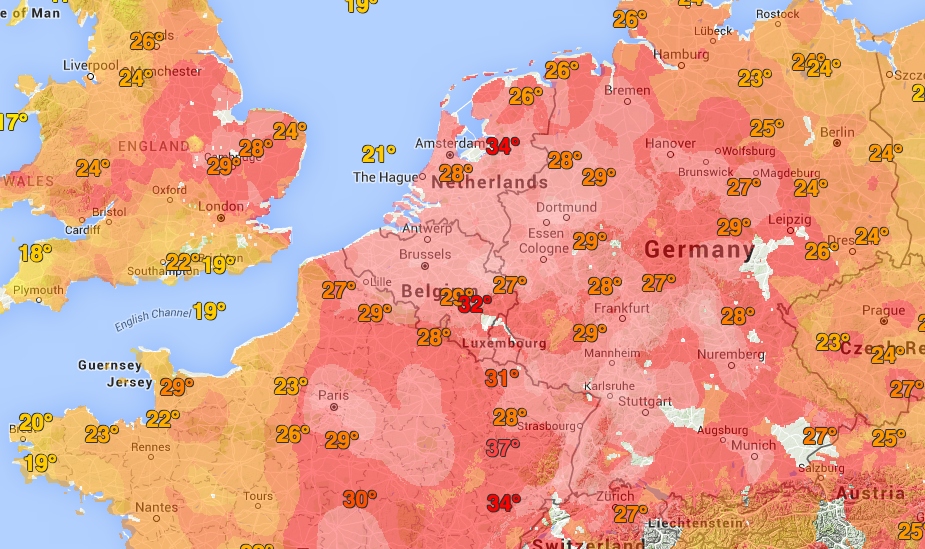