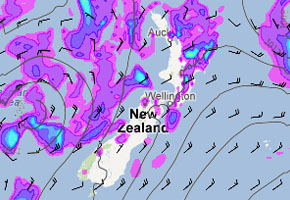 The east coast of the North Island is looking likely to receive rain on Saturday, also from East Cape right up north through to the eastern coastline of Northland should expect showers, the odd sunny period too. Dry at first in western areas however showers start to trickle in by evening.

The South Island is looking cloudy also, expect showers in Nelson and along the east coast clearing in some places in the afternoon particularly in Canterbury and Otago. A few showers on the West Coast becoming more widespread about South Westland by evening. Dry in Southland for much of the day. Winds will be breezy from the northeast.

Temperatures of 14 degrees on average can be expected about the coastlines south of Gisborne and Taranaki, further north expect high’s of between 15 and 17 degrees. Cooler in the Central North Island with high’s of 13 expected. High’s of 13 for most in the South Island, a degree or two warmer about Marlborough, Nelson and Buller.