Home > News > Outlook for tomorrow, rain to ease in So...

Outlook for tomorrow, rain to ease in South Canterbury 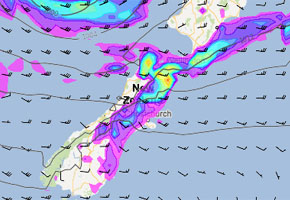 The rain should ease in the South Canterbury area tonight and the focus turns to the foothills of mid and North Canterbury tomorrow, also Marlborough however rain is not expected to be as heavy. The ski fields will be happy though with some snow likely about 800m in Canterbury.

South Westland will get nice weather tomorrow with east to southeasterly winds. A few showers possible at times north of the Glaciers however with gusty easterlies, showers more likely in Tasman. Showers or rain for Nelson. Southland will remain mostly dry with some cloud and breezy easterlies.

Sunny areas and periods of showers in the Bay of Plenty, Waikato and further north into Northland with north to northeasterly winds. It should remain dry in Gisborne with some cloud, chance of some showers there at night however. Wet south of Hawkes Bay through to Wellington. Northern parts of the Manawatu and Taranki should get a dry day with some sun, easterly breezes there.

The ‘occasional showers’ forecast for In,gill in the 11am update, didn’t eventuate.