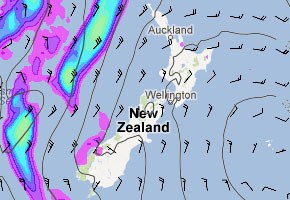 Northeasterly breezes will pick up for the top half of the North Island tomorrow with some scattered cloud, cloud will thicken up around Northland with a few light showers possible in the east from afternoon. Mostly sunny over the rest of the Island with north to northeasterly breezes, light morning frosts in inland areas first thing.

If it’s feeling a little cool along the east coast in the South Island take a drive inland if your looking for something to do and it might be a little warmer with northwesterly winds more likely, a visit to the Sheffield pie shop sounds like a good day out followed by a walk up behind Oxford starting out in Coopers Creek. Ryde falls is a nice walk but around 2 hours there and 2 hours back again so you might not want to go to far if taking the kids or if you’ve had to many pies.

The low forming in the Tasman Sea will deepen over the weekend and start affecting many areas from Sunday in the North Island then early next week in the South Island. It looks like it will hang out west of the country all week due to a blocking high out east of New Zealand, prepare for a wet week particularly in the east.