Home > News > Outlook for the weekend...

Outlook for the weekend 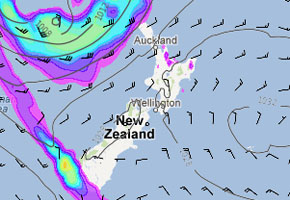 Conditions are still looking mostly the same as in Howard’s article this morning. The departing high and incoming low towards the North Island means things are slowly becoming less settled, some areas will still have some sunshine however.

East to northeasterly winds will be gusty about the Bay of Plenty northwards on Saturday, areas of cloud increasing during the day with drizzle or light showers later. East to northeasterly winds in most other areas of the North Island but winds will be lighter, sunny areas and some cloud. About Wellington expect northerlies. High’s of between 13 to 15 for most, a degree or two warmer in Northland.

In the South Island for Saturday it’s looking a little cloudier for the lower third of the Island with patchy light rain or drizzle gradually spreading to most areas during the day, it will be dry in Otago for the most part till evening as light southerlies arrive. Mostly fine and sunny about Marlborough, Nelson and Tasman with light winds and some high cloud, sunny about Canterbury also but winds will tend light southwest by late afternoon or evening with some cloud. Cloudy areas on the West Coast with drizzle south of the Glaciers, some rain moves into Fiordland. Temperatures for most between 12 and 14 degrees.

On Sunday rain will move into Northland with drizzle patches south through to the Bay of Plenty and East Cape, east to northeasterly winds will be gusty. Sunny areas and some cloud south of the Central North Island but cloud will thicken during the afternoon with light showers at night. Drizzle for the lower South Island clearing later however moving into mid Canterbury by evening. Dry with some high cloud north of Greymouth along the West Coast, also in Nelson and Marlborough. General cloud lower down will increase in Nelson and Tasman during the afternoon. Any morning drizzle patches south of the Glaciers clear with the odd sunny break then increasing with light winds.