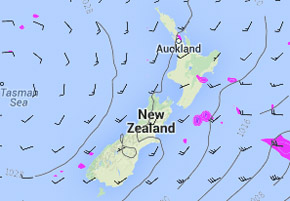 Mondayâ€™s weather is a bit so so, a front moves quickly over the South Island and lower North Island during the morning. This front even though fairly fast moving is quite weak and doesnâ€™t have much to it, it mainly affects southern and eastern parts of both islands and even then most will only see some cloud move through with a cool wind change.

For the Waikato through to Northland expect periods of cloud and a few sunny spells with southwesterly winds, from midday there is the slightest risk of a light shower Auckland northwards otherwise mainly dry conditions prevail. About the Bay Of Plenty, Central North Island and Taranaki through to Kapiti conditions are mostly sunny with light
winds tending southerly in the afternoon. Wanganui southwards in the west may see a few
clouds drift in from midday.

Wellington is sunny at first then southerlies freshen mid to late morning bringing periods of cloud, southerlies
freshen during the afternoon along the east coast bringing cloudy periods and the risk of a light drizzle patch or two.

To the South Island, morning cloud on the West Coast breaks away to a mostly sunny afternoon with
southwesterly winds. South to southwesterly winds freshen about Southland and
Otago early on bringing cloud and the chance of a shower, sunny spells increase
from midday with winds dying away in the evening. Canterbury and Marlborough see
sunny weather at first, southerlies freshen by late morning bringing some cloud
and the chance of a light shower or two otherwise mainly dry once again.

The rest of the week so far is looking fairly tame, eastern regions will do well mid to late next week with warm temperatures likely.