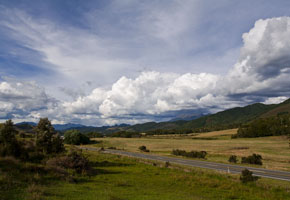 UPDATED: 5:20pm Tuesday – The forecast for New Years Day currently shows a west to northwest airflow over New Zealand with an area of high pressure north of the North Island and a low pressure system over the lower half of the South Island.

Rain may be heavy in the west of the South Island and
trampers should be aware of possible rain warnings.

Northland
Sunny spells at first with light northerly winds. Isolated showers develop late morning, possibly heavy with thunderstorms in the afternoon then clearing in the evening as winds change to the west.
Likely afternoon Temp: 23 to 25 degrees (warm)

Coromandel Peninsula, Bay of Plenty, East Cape, Gisborne
Mostly sunny in the morning light winds, some cloud builds in the afternoon with isolated showers developing. Showers becoming heavy for some with possible thunderstorms then clearing later in the evening with a westerly change. Showers, heavy with possible thunderstorms don’t clear eastern Bay Of Plenty till overnight. Gisborne can expect mostly sunny weather and warm temperatures with some high cloud developing in the afternoon, a few spots of evening rain possible then clearing. Winds from the northwest.
Likely afternoon Temp: 23 to 26 degrees (warm)

Hawkes Bay, Wairarapa, Wellington
Mostly sunny about Hawkes Bay and the Wairarapa with light winds and afternoon
northwesterlies, winds will be brisk at times about southern Wairarapa
from afternoon with warm to very warm temperatures. Some high cloud moves into the Wairarapa from midday also and then Hawkes Bay in the afternoon, a shower or two may spread from the west late afternoon and evening for both regions. Wellington sees mostly cloudy skies with strong northerlies, the odd shower there from morning then some afternoon rain before easing in the evening.
Likely afternoon Temp: 20 to 28 degrees (moderate to very warm)

Taranaki, Wanganui, Manawatu, Horowhenua, Kapiti
Skies becoming cloudy in the morning with the northerly breezes, the odd shower possible this morning especially about northern Taranaki, Rain spreads to most areas during the afternoon possible heavy then easing in the evening as winds tend more westerly.
Likely afternoon Temp: 19 to 23 degrees (moderate to warm)

Nelson
Rain develops in the morning with the chance of a heavy fall or two. Rain clears in the evening as northerlies change westerly. Late sunny spells before the sun goes down.
Likely afternoon Temp: 21 to 22 degrees (moderate)

Marlborough, Canterbury
High cloud for Marlborough with brief rain at times from morning, some more persistent rain for a time in the afternoon then clearing in the evening as northwesterlies change westery. Canterbury sees some brief morning rain then clearing, chance of a sunny spell or two. During the afternoon a few further showers or areas of rain move over spreading from the west which clear in the evening, easterlies near the coast and northwesterlies inland. There is the chance of a southerly wind change late
afternoon and evening for coastal areas of South Cantebury through to
about Banks Peninsula then easing evening, this may bring an isolated heavy fall for coastal areas south of Banks Peninsula.
Likely afternoon Temp: 21 to 24 degrees (moderate to warm)

Southland, Otago
A period of early showers about Southland and Otago then clearing for a time with light winds and sunny spells developing, south
to southwesterly winds push through in the afternoon bringing further
showers possibly heavy in the east then clearing evening. The Southern
Lakes region is likely to be mostly cloudy during the day with showers
spreading from the west at times, winds will be from the west or
northwest.
Likely afternoon Temp: 17 to 20 degrees (mild)