Our biggest storms – What’s been the worst? 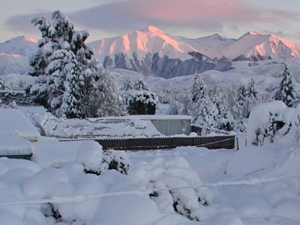 This country has been through all sorts of severe weather events and it seems we are heading into more extreme times in future years.

We’d appreciate your help in compiling New Zealand biggest storms of all time.

There have certainly been some unwelcome visitors ranging from hurricane force winds to blizzards and anything inbetween.

1/ Winter snowstorm of 1939 which affected more than 80% of the country and lasted several days.

2/ Wahine storm of April 1968 where winds blew in excess of 200kph and saw the Wahine ferry sink in Wellington harbour with significant loss of life.

3/ Cyclone Bola in 1988 which caused millions of dollars worth of damage to the eastern North Island.

4/ Canterbury snowstorm of 1992 where heavy stock losses occurred and Christchurch was almost completely shut down.

5/ Huge nor’ west blow in August, 1975 which affected eastern parts of the country causing considerable damage.

Do you agree or disagree? What other events have ripped through parts of the country?
What is the worst flooding event you can think of perhaps? Anything goes and feel free to make a comment.

Clyclone Giselle (The Waihine Storm) would have to rate as one of the worst. Even though I was too young at 4 to remember the effects of Giselle as the storm travelled down the NI I remember looking at a photo in the Auckland Star of the Waihine capsized in Wellington Harbour and telling all in earshot that I would never travel by plane or ship as they have accidents (even though I loved going out on the family boat and have happly travelled by both since).
Cyclone Bola rates as well and the worst storm I can recall in Auckland was the Weather Bomb in 2007 that blew out glass in bus shelters on the Shore, roofs of houses, damaged buildings in Central Auckland and caused damage to a cruise ship that sailed just before the port was closed (with 50 knot winds in the harbour) and ended up sheltering with one of the Navy ships at Great Barrier Island.

Number one to me and Im sure many other Wellingtonians would have to be the Wahine Storm of 1968.From the 9th April being a very pleasant day, then waking up to the howling gusts of wind and then the tragedy of the Wahine, and by nightfall most of the storm had gone.Yet the loss of life so close to shore and safety in this modern era had a dramatic effect on the whole country
I do think all the others you suggest were severe storms but were felt in more in certain parts of the country more than others and not fortunately with huge loss of life.

1938 Hawkes Bay disasters – caused more damage to infrastructure than the Hawkes Bay earthquake did. Although of a short duration, the first storm of 19th February was of such intensity that streams rose by up to sixty feet, with unprecedented damage being caused to the area, as a result of slips and washouts. A normal flow in Kopuawhara stream of 22 cusecs had peaked at 33.900 cusecs. Thousands of sheep and cattle were lost and entire farms were buried in silt. This was the cause of the Kopuawhara disaster which killed 32 men. It wasn’t cyclonic but the 2nd storm just two months later in April was. That one either destroyed or damaged 51 county road bridges alone, making Bola look like a dwarf. The Minister of Public Works reported the magnitude of this second storm disaster as being beyond anticipation. He added that it was one of the worst calamities that had befallen the Dominion and that the loss of property, public and private seemed to exceed that of the Hawkes Bay earthquake. As an example, Mohaka River rose by 45 feet and ran at 225,000 cusecs. That is a collosal rise. In a space of just 2 days, an unimaginable 1,106mm of rain fell on Esk Valley, where the river rose from 2 to 30 feet deep. (As a comparison, at Tutira 753 mm of rain fell in 4 days during Cyclone Bola). Where the railway bridge was located, the Esk River peaked at 64,700 cusecs. In three days, 610 mm of rain had fallen at Tutira, and a staggering 1,000 mm at Puketitiri (with 390 mm in one day). And that’s just for starters. Destruction was collosal. Although Bola was severe, it later became known by media as “the storm of the century,” which is misleading, as the 1938 event shows that a much larger event than Bola is again likely to take place sometime in the future.

Lower Hutt floods of 1976 took a toll in things, but not life as I recall and Feb 2004 flooding in Wainuiomata was also very bad, as we got completetly cut off from Lower Hutt due to the hill road being closed. Was a busy day in the fire brigade that day. I did 18 hours on the go, but some of the other guys did 24 hrs+.

The huge February storm of 1936. Ereck Brenstrum has researched it extensively. By far the most property damage of all 20th century events.

I think the Floods in the Bay of Plenty should rate up there, I think it was reffered to as a weather bomb at the time. Bought town alot of mud from the hills into a little Bay Of Plenty township that I can not remember the name of right now.

Also, the Southern Storm that bought considerable snow to Wellignton one or two years ago should rate, at the time I think people were saying it was the biggest southern storm since 1939.