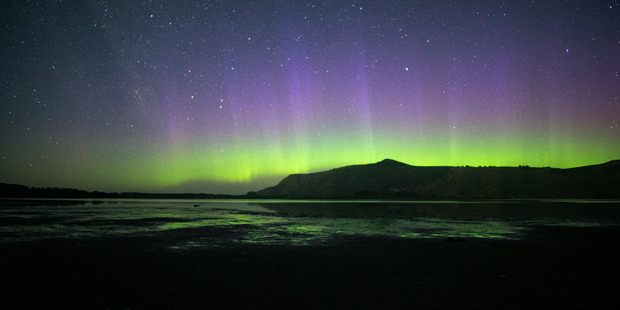 Southern stargazers saw in the new year with a spectacle far more impressive than any fireworks display as the Aurora Australis lit up the Otago sky.

Dr Ian Griffin, who, as well as being the director of Otago Museum, is a professional astronomer, captured the aurora in a series of photographs taken from Hoopers Inlet on the Otago Peninsula.

In an extraordinary piece of good timing, a bright meteor shot across the multi-coloured sky just as Griffin clicked the shutter for one shot.

Griffin said he and his wife had taken their dog out of Dunedin so it wouldn’t be frightened by the city’s New Year’s Eve fireworks show.

Although an aurora had been forecast, it was impossible to predict exactly when it would occur or how impressive it would be. “To some extent you know that an aurora’s going to be coming and you get a couple of days warning, although it’s more of an art than a science. So it’s very hard to predict exactly what you’re going to see.”

There wasn’t too much activity by midnight so he thought they might leave disappointed.

But about 1am beams of light started zooming across the horizon.

“It couldn’t have been better,” he said. “For someone like me, I’m passionate about looking at the night sky down here, so an aurora on the morning of New Year’s Day was just a brilliant, brilliant way to see in 2016.”

The Aurora Australis, also known as the Southern Lights, is caused when the Earth’s magnetic field interacts with a flow of highly charged particles from the sun.

The different colours come from the various elements in the earth’s atmosphere – the green is from oxygen and the red from nitrogen. Griffin said the display lasted until dawn.

A magnificent selection of images from Otago by Ian Griffin, thanks for sharing his passion.

Much better than smokey, scary fireworks, Mother Nature delights us!