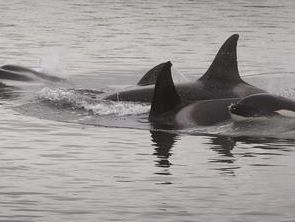 Hundreds of people watched in awe as about 10 orcas ventured deep into Tauranga Harbour hunting food on Tuesday.

Office workers and school children came to the water’s edge as the pod drifted under the Matapihi footbridge towards the Waimapu Estuary, sending stingrays scrambling into the shallows.

It was the latest in a number of orca sightings in Tauranga waters in the past fortnight.

By 9.30am more than 50 people had gathered on the footbridge with cameras.

One of the last adult orcas to cruise back under the footbridge offered plenty of photo opportunities as it surfaced three times, presenting a huge dorsal fin and glimpses of its gleaming black-and-white back.

Tauranga insurance broker Karin Deed had a good view of the pod from her office in the Westpac building and was rapt her boss let her pop down for a closer look. “It’s pretty spectacular … they’re magnificent creatures.”

It was the first time Alta Van Blerk had seen orcas in Tauranga waters.

“It’s cool that they visit Tauranga. I just wish I was so carefree as they are … they don’t have a worry in the world.”

Two classes of Tauranga Primary School pupils had already planned a morning’s fishing when they wandered down to see the orca frolicking on the other side of the harbour.

Nine-year-old George Goodchap said he had already seen a five-metre orca up close while out fishing, but it was his classmate Taylor Lamont’s first orca encounter. “They’re big with pretty cool fins,” she said.

Orca researcher and whale expert Dr Ingrid Visser said stingrays – which she called “orca chocolate” – were what had attracted the pod.

“Like any animal, they’re driven by food, sex and shelter, and in the case of orcas coming into Tauranga Harbour they’re there for food. Stingrays are very attractive to New Zealand orcas and they’ll go to great lengths to get them.”

She said it was “always very, very special” for people to see them.

Yesterday’s sighting came after orcas were spotted off Papamoa Domain, at Omokoroa and around Sulphur Point and Pilot Bay last week.

Department of Conservation biodiversity programme manager Chris Clark said orcas were usually seen around the entrance to Sulphur Point and off Otumoetai.

Mr Clark reminded people that orcas were protected under the Marine Mammal Protection Act, which prohibited people from approaching within 50m of them.

“If the whale chooses to come closer, then so be it, but people in boats should not approach them.”