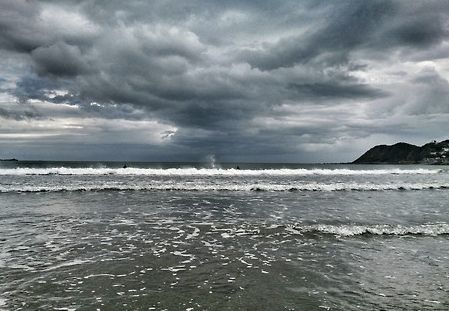 Article by Joe Reich who runs thebay.net.nz — As the long weekend comes to pass across the South Coast of Wellington I got to thinking about a question I was asked a few days ago.  It went along the lines of “Does Wellington deserve its bad weather reputation”

I have to say, maybe it does at times when the southerly off Cook strait is really talking and the only thing one can do to get down the street is really hunker down and just, well, do it.

But, it’s really a small thing, I mean hey it’s only weather, what it brings out in this home of ours, and I feel its people, is a sense of community – a passion for the outdoors and a feeling of lets just get on and do it.

When the June storms came through last year, right from Owhiro Bay, Island Bay the South Coast and Wellington at large, we all pulled together.

As mother nature left numerous people without power, roads broken and trees down, people were out clearing, fixing and making sure their neighbour was ok.

I will never forget being down Lyall Bay around midnight and seeing the true raw and dangerous power of the swells in the bay,

I think it would be possible to just keep on writing about what I have seen and experienced, let’s cut a long story short – watch as the waves roll in along the south coast or the sun beats down over a perfect picture of a harbour …and think, it may be weather but the nature, experience and drama it gives this city lets us be proud of its reputation and lets us look forward to the next “Wellington” day.

Wellington may have a windy reputation, but the city enjoys some fantastic weather too.

What do you think?

Does Wellington have fantastic weather, awful weather – or something in between? Web readers post your comments below…

they have been getting all the rain in the north isl and mainly  in the last 17 months but it will stop one day and you will be crying out for rain next….the same with the south island

It is true, on a good day there is no better place to be. When it is bad, it can be very bad indeed, but all the same it is a beautiful looking harbour which is ringed with hills and mountains. We share their skies, wind, rain, cold, warmth, being part of Wellington’s orographic climate. Because it is orographic and so complex, you can’t take a simple look at Wellington’s climate like you can in other areas. It doesn’t make any sense to compare Wellington with other countries either, as NZ as a whole is mountainous, orographic and surrounded by a moderating ocean. NZ stands alone and certainly with Climate Change, the overseas models are non-applicable here. Taking that into account, the Capital has some truly awesome orographic processes that a lot of people simply do not comprehend. Take the t-storms for example, the type encountered in the Wellington Region occur in very few places on earth. No where else in NZ can lay claim to that, or to t-storms in a stable atmosphere. It is truly neat how they start in this region. With climate change already here and places like Auckland expected to get wetter, stinking hot and into the 30’s, there is no other place I’d wish to live other than Wellington with its cooling winds. As for the Westerlies getting stronger, again I think Wellington will be the place to live as it is pretty strongly built. June 2013 and the round of big quakes were a very good test for that. As for facing off a big system on the coast, I do it too. That takes an act of bravery when it is polar and savage, but there is nothing more exhilarating than to get blasted point blank by the high wind. It is a truly awesome experience and an instant killer of any SADS that might be lurking. As for Wellington’s reputation, Cook Strait and its gap wind deserves that, and it menaces us big time as well. Pohutukawa trees that grow along the ground like creepers in Paekakariki is testmony to the savagery of Cook and the notorious Westerlies. Cook Strait is one awesome stretch of water and I love its fury. With Climate Change afoot, it is time to enjoy things like this now, as change for the worse may well arrive tomorrow; Climate Change.

It does get its wind SSE/NW but generally not wetter than say Auckland and stunning sunny days especially in west or some SW flows that the west has cloud and from the NE when northern areas have wind/rain.Its usually cooler than some of its northern counterparts though often less humidity and drier.

I prefer to avoid a really detailed subjective assessment, as one only has to look at large sites like the US “city-data” weather forum to realise how diverse climate preferences can be. I am more interested in the average or “total” climate than what happens in extreme events, so base my views on averages. As a lover of sunshine, I can’t find paradise anywhere in New Zealand, but at least Wellington is above the national average in both geographic and population terms, and is far ahead of Dunedin and Invercargill, where I spent about 17 years of my life. The rainfall is higher than I would like – but that applies to about 80% of the country anyway for me, and semi-arid or near-desert would be better. The rainfall has been somewhat higher in the last decade especially compared with the 80s, but I expect this to reverse somewhat soon. The wind can certainly be annoying, but the clarity of good days is hard to better, and a reasonably sunny day will always be preferred over cloudy ones regardless of wind or temperatures.

I lived in Wellington for just 6 months but I found the wind something that became like water off a ducks back,I quite enjoyed it. The southerly can be wet and cold unlike Auckland where I am now, which is often sunny and mild with a southerly, even hot in Summer. The wind seems to blow away a lot of pollution (natural or manmade) and a light southerly with clear skies is stunning in the Capital.  Compared to Auckland I loved Wellington’s ever changing weather, Auckland can be too repetitive in my view…although I love the warmer summers and hotter weather in the north.  Thanks for adding your thoughts!

We spent a pleasant 5 days in Mairangi Bay recently – a bit changeable, but the total rain from the few showers wasn’t much, and a couple of days around the 20C mark made a good impression. I don’t know any numbers offhand for the “Bays” but I imagine air frosts would be virtually unknown in Mairangi and similar coastal spots – not that frosts trouble me – indeed the odd one in the south was quite welcome as the chances of getting a clear day were much better then.