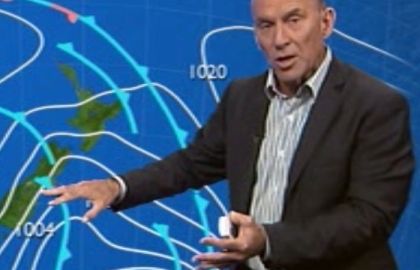 The New Zealand Herald’s TV reviewer takes a look at NZ’s TV weather…and doesn’t like what he sees.  Colin Hogg is a NZ Herald reviewer — Apparently, it wasn’t Mark Twain who coined that universal question, “Why does everybody talk about the weather but nobody does anything about it?” and neither was it TV One’s eternal weatherman Jim Hickey.

Hickey, along with television’s other primetime weather wizards, rarely has anything wise to say about what the sky has in store for us.

The app on my cellphone has more to offer than Hickey and his honchos’ arm waving and rain radar, and cute cloud and sun graphics.

But that doesn’t matter. Weather on TV is as imprecise as the news and just as important. TV One in particular sees the weather as headline news – even when there isn’t a radical rain event in sight. Just ahead of One News at 6 every evening, either Hickey or fellow presenter Karen Olsen pops up fizzing about the cold front that’s moving up the country before teasing us with, “Later, I’ll tell you which town will get the showers.”

The first news item can have trouble matching that for sheer excitement. But that’s only the first of three weather reports scattered through the nation’s most watched nightly news programme. Around seven minutes of a thin and ad-raddled news hour is devoted to the theatre of weather.

TV One has more weather coverage per news show than any other channel, along with flasher maps, better graphics and more presenter passion.

Far too much passion, often, when it’s Hickey waving his arms. Even after more than 20 years before the map, the man is a permanent high. Olsen, thankfully, is more of a warm front.

I get the feeling there’s more to the extravagant TV One weather coverage than seems immediately apparent, raising interesting questions. Why, for instance, is so much emphasis put on parts of the country where hardly a soul lives?

Fiordland, the West Coast of the South Island and barely-populated Marlborough sometimes get almost as much attention as Auckland. And why does Auckland come last in the main centre temperatures instead of first and should Tauranga really be regarded as a main centre?

These and several other questions are begged nightly, though the answer probably is that all this weather reporting is a bonding exercise for the nation – a way to mention the little places that otherwise wouldn’t crop up on the news.

There are towns out there that dream of being on the TV One weather map.

Over on 3 News, the weather is a much plainer, end-of-the-news affair, with a much plainer presenter in Mike Hall, a bit of a not-quite-Hickey. The other night I heard him comparing the weather to a bagged salad from the supermarket.

“You don’t always get what you want,” he suggested which, like the lettuce, was limp.

They do have rain radar, a colour-coded temperature scale and some cloudy effects, but it all looks a bit low-budget and unexciting compared to TV One’s grander style.

Over on Prime, they’re almost offhand about the weather in their half-hour bulletin at 5.30pm. Newsreader Eric Young leaves it till the last minute and it’s all over in less than that.

And Maori Television doesn’t get much more exercised about whether it’s going to rain or not. Their nightly Te Kaea news show keeps the weather under the two-minute mark, perhaps having spent all their money on the nice weather music.

Which, perhaps, isn’t such a bad thing. Anyway, as Mark Twain didn’t suggest, none of it will make any difference to the weather.