OPINION: MetService’s warnings and watches now being diluted by NIWA 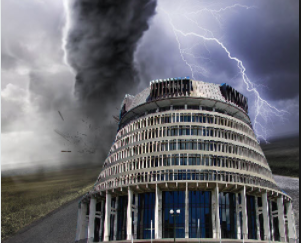 After the violent wind storm last week Aucklanders have asked why they weren’t properly warned of the event. MetService did have language about gales ahead of the storm but you can certainly argue their language was fairly stock standard, wording we’d all seen before many times with little to no damage or problems.

However WeatherWatch.co.nz actually defended MetService last week after comments by the State forecaster about the public not hearing their forecasts. So why didn’t people hear the “official” message from the New Zealand Government’s forecaster? Simple – we now have two official voices with two different messages. MetService is now competing against another Government agency, NIWA, for storm headlines.

NIWA is a Crown Research Institute and only recently started a commercial forecasting division to compete head on with MetService – another Government agency. This was allowed under the National Government in 2013 after being prohibited by all other previous Governments dating back to 1991. Prohibited because having two Government weather forecasters would likely cause confusion.

NIWA is aggressively on social media and loves big headlines – this year predicting a 40 degree heat wave that never eventuated, for example. NIWA also tends to have a bad habit of calling general lows “storms” and don’t appear to have a big grasp of local weather conditions, perhaps due to their forecast team coming from overseas. NIWA and MetService combined get over 150 million dollars of tax funding each and every year (and don’t always even pay the Government a dividend) and now NIWA and MetService commercially compete in the exact same space. Former Senior Minister Steven Joyce once told WeatherWatch.co.nz this set up appeared to be “muddying the waters” and lead to the independent MBIE review which National then stalled releasing for nearly a year and now this current Labour Government is delaying for another year on actioning anything in it.

The mainstream media in New Zealand has fewer staff and lower budgets than a decade ago so another Government Agency providing them with flash tax funded weather graphics and big headlines (as it’s more ‘official’ than the private sector) guarantees major headlines in all news outlets each and every time. The media rarely if ever question why NIWA and MetService compete against each other – they just use them both. So you’ll now usually see both NIWA and MetService (two Government agencies) being quoted side by side about weather forecasts. This happens no where else on earth.

So when MetService said last week to the New Zealand Herald “Apart from going around knocking door to door, there is not much more we could have done [to get our message out]” we push back saying there is a LOT more that could be done – starting with MetService leading the charge to work with the Government to stop NIWA weakening MetService’s own tax funded warnings and competing against them. Our entire population is lower than Sydney’s yet we have two Government owned commercial forecasters competing in the same space.

No other country on earth has two Government forecasters, let alone two aggressive commercial ones, but New Zealand does – and we wonder why the “official” messaging is now getting diluted and lost.

NIWA is a dying cut off low that is out there on its own its own, spinning around in ever increasing circles. It needs to be restructured, as there is now little use for their climate activities. MetService does a better job at outlooks and stat’s and communicates them to the public in a far superior manner. Even Weatherwatch does a much better job. Any research by NIWA is not available to the public, which makes it a pointless waste of time and anti-modern science. They need a huge restructure and absorbing into the MetService to save taxpayer dollars. The entire NZ weather industry needs a giant shakeup and then it needs to come into the correct century.

Typical NIWA forcast ‘fine weather with chances of rain, possible showers, some sunshine mixed in with some wind and the occasional gust’

Aren’t you also competing in this space? Don’t you also run the risk of confusing the public?

Hi there, thanks for your question. The private sector is supposed to compete and work alongside the public sector – the public sector isn’t supposed to be designed to be an aggressive business sector stopping private growth. More importantly, the private news sector (like WW, as we are primarily a NEWS & weather outlet) is supposed to hold the public sector accountable not turn a blind eye – if we reported on what they both said it would cause far more confusion to the public because the Government should have ONE voice (as they do in weather worldwide except here). The Government is to provide services – not behave this way, as you can see from all the supportive comments coming in.
Cheers

Agree entirely, but not unprecedented. Landcorp (PAMU) competes with private farmers, but uses public land assets. The CRIs compete with each other, and the private sector too. Regional Councils compete with Local Authorities. Power companies compete with each other. Schools and Universities compete for students, and so on. The fanciful, but flawed notion is that competition improves efficiency. In small or complex markets this is rarely the case, and frequently you instead see a race to the bottom, and inevitable mediocrity.

Seems to me that NIWA are trying to grab the headlines too much with heatwave and biggest storm on earth etc. Makes people feel blah about Metservice warnings when they are tired of NIWA crying wolf all the time just to get in the news. Short term forecasting is not part of NIWA core business and shouldn’t be taxpayer funded

I agree with all you have said Phil, also I only use WW for forecasts especially major stuff as you tell it like it is with facts not fluff or eye candy.

Also why is the Government delaying?? what do they know that the public does not, this makes me worry we , the public, are again being used as a cash cow.

So thank you for being there and keep up the good work as it must sometimes be frustrating knowing about all this rubbish going on with tax funded organisations.

I agree too! And thank you for explaining.
To be honest I really only watch out for what you guys at WeatherWatch have to say. I’m my opinion, MetService just don’t quite have the urgency or details the public need to judge the urgency of an impending situation. Their latest explanation on the difference between a watch and a warning is a little bit weak. They seriously need to find a better grading system – like geonet for example. The other agency I think to blame is civil defence, they only published a stock standard post about the possibility of a storm, they need to sort their warning system too.
Other than that, you guys are amazing and thanks so much for your honesty and clarity in all of your video updates!
I was able to properly warn a few people last Tuesday because of that.
Audrey

Absolutely agree with you Phil. The current setup is illogical. Keep fighting the good fight. Any news as to why Labour are stalling on action now?

Thanks very much. We believe Labour has stalled simply due to being new in Government and sorting all their priorities. We are pleased that we are meeting with Minister Woods’ Office next week to discuss this in a more formal setting for the first time with this Government.