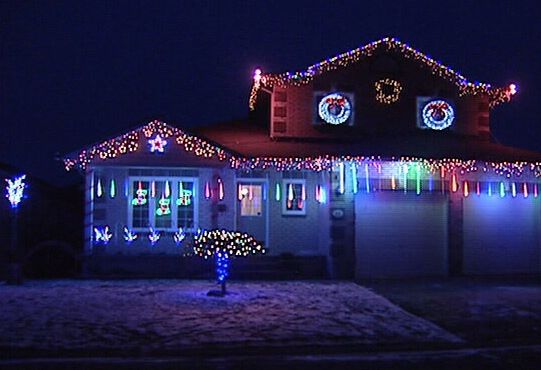 I have been lucky enough to experience two northern hemisphere Christmases in my lifetime.  Once in London, in the 80s, then in 2005 in Canada.  The rest have all been in the North Island of New Zealand and the weather has varied as much as the presents – from major tropical storms to hot 30+ days.

My mother was born in England and has lived most her life in New Zealand – but despite decades here she misses a Northern Hemisphere Christmas – and I understand why, since experiencing the magic of it twice.

Canada is my favourite Christmas destination.  In 2005 I had my first ever white Christmas.  20cms of fresh snow on the ground.  Every house had a white ‘lawn’ which glowed in the evening – orange from the street lights then mutli coloured reflections from the Christmas lights on random small woody shrubs, or along the eaves of the house.

While Canadians grizzled about the snow and cold, this Kiwi boy had eyes wide open absorbing this real life Christmas fairy tale.  The days are very short too.  The sun rises mid morning and sets mid afternoon. It never once feels dark and gloomy though. Not at Christmas time anyway.

Contrast this with a red faced Santa sweating it out on a blue sky 28 degree day with high humidity – suddenly Santa looks a bit out of place dressed up in a thick wool coat and outdoors tinsel can look tacky next to Mother Nature’s own bright, colourful, flowery decorations at this time of year.

However my love for a white, cold, Christmas is certainly balanced – I think evenly – with the hot Kiwi Christmas.  For years I used to head off camping on Christmas afternoon, after lunch.  The Christmas Day drive meant fewer cars on the road – and as we headed to our beach camping spot in northern Coromandel Peninsula you’d see family after family on the beach.  Dad with a BBQ going, Mum and the kids playing cricket, the dog barking and running around after the ball.  Sunscreen on kids noses and beach umbrellas giving shade to those sipping white wine or enjoying a beer…while someone races down the beach trying to catch their sunhat that just flew off.

There is something equally as magical about a Kiwi Christmas – but wow, they couldn’t be further apart could they?

Have your Say – Have you experienced Christmas in another country?  What was it like?  Post your comments below!

A neat story, I enjoyed that! Most of my Christmas Days have been spent in the Wellington Region. Need I say any more, LOL. The closest I’ve ever been to a northern hemisphere winter is a cold southerly screaming through the place with heavy rain and SH1 flooding here, which being cut off and having to stay at home. Sigh. Long learnt to expect anything at all weather wise at Xmas. Like the rampaging gale force wind last New Years Eve that cancelled every outdoor event in the entire region … brassed me off. Then on the postponed date, it did exactly the same thing again. Like there is a big humourous joker in the sky over Wellington at times. Last Xmas Day was way too hot with that tropical air being dragged down. The streets were empty as it was too hot to go out and very few were swimming as the sea water was still cold. Seeing vivid white CBs around the hills and the massive supercell from the Manawatu was a great pressie from mother nature last Xmas. CBs along the hills throughout the entire region is a rare sight here, but heating ones cannot fire up here. Maybe a normal Xmas Day this year … please … 23C or so with a nice sea breeze. In reality though, being so westerly again, I think just expect anything at all.

I love a northern hemisphere christmas, but new year is meant to be had in Summer!

I was 32 years old when I came to NZ in November of 1972, this was to be my first Southern Hemishere Christmas and wow what a difference. I certainly did not miss the cold weather but the period was completely un-christmas like even though everywhere was decorated for it and the spirit was strong. Over the years I have gotten used to it but still miss an English Christmas deep down.

I daresay all my memories of that time were happy and exciting especially as a child and the few white Christmas’s I experienced were full of fun and frost bite making slides on the snowy surface and sledging in the park. Later I came to bemoan the ice, fog and intense cold and found no fun in digging the drive way out of several inches of snow before I could go to work.

However I do not think that now I would enjoy the weather there and love the summer time here and I think the icy conditions would be somewhat dangerous at my age now.

I have a daughter in Canada and she misses the NZ Christmas as she was too young back then to have any memories really. She pines for the sun & beaches and as they are enjoying minus temps at the moment her feelings for the NZ Christmas are very strong.

I have never experienced a white Christmas but one day I will. My goal is to save up enough money to take my mum to somewhere snowy for her birthday which is on Christmas day.  She has always dreamed of having a white christmas/birthday and I want to make her dream come true