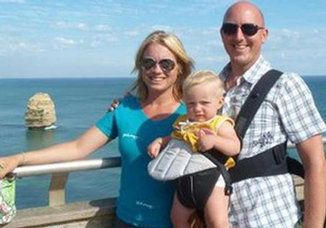 A Swedish couple’s honeymoon struck disaster six times – with the couple witnessing floods in Australia, destruction in Japan and the earthquake in Christchurch.

During a four-month trip, newlyweds Stefan and Erika Svanstrom and their baby girl Elinor survived a snowstorm, a bush fire, a cyclone, the Queensland floods, the Christchurch earthquake and Japan’s earthquake and tsunami.

“One can only laugh at the misery – it is quite unlikely. But we have luck with love,” said Mrs Svanstrom after arriving home in Stockholm.

The couple set out on the honeymoon a week after their “fantastic” wedding on November 27.

But they were immediately stranded in Munich, Germany, by one of Europe’s worst snowstorms.

Trying to care for their infant through delays and missed flights made them anxious to reach their holiday destinations, Mrs Svanstrom told Sweden’s Expressen newspaper.

But the trip did not improve. Instead, it went from one natural disaster to another.

After a few weeks of storm-swept travels in Southeast Asia, the family flew to Australia where they experienced the devastation of a huge cyclone in Cairns.

One day after a diving trip on the Great Barrier Reef, they had to spend 24 hours on the cement floor of a shopping centre with 2500 other people when the cyclone struck.

“We escaped by the skin of our teeth,” Mr Svanstrom said.

“Trees were being knocked over and big branches were scattered across the streets.”

As they continued their travels through Australia, they found themselves in the middle of the flood damage in Brisbane while visiting a friend.

In Perth, they narrowly escaped bush fires that flared as they left town.

Their next stop was New Zealand – where their plane touched down just after the magnitude 6.3 earthquake that hit Christchurch on February 22.

“We were there, the whole town was a war zone. We could not visit the city since it was completely blocked off,” Mrs Svanstrom said.

People were visibly disturbed by one of the worst disasters in the country’s history, but they showed great unity, she said.

The family then flew to Japan.

After two days of visiting temples and sightseeing, they sat in a McDonald’s in Tokyo for a late lunch.

“The trembling was horrible and we saw roof tiles fly off the buildings. It was like the buildings were swaying back and forth,” Mr Svanstrom said.

“Everyone ran into the street, cars stopped – and then there was a strange silence.”

The Svanstroms returned to Stockholm on March 29 after a much calmer visit to their last destination, China.

They escaped all the disasters unscathed but said they still experienced some uncomfortable moments.

Mr Svanstrom, who also survived the devastating Boxing Day tsunami that hit Southeast Asia in 2004, said the marriage had persevered through the calamities.

“I know marriages have to endure some trials, but I think we have been through most of them,” he said.

“We’ve certainly experienced more than our fair share of catastrophes in a marriage, but the most important thing is that we’re still going strong.”

Mrs Svanstrom said she could only laugh.

“You think, ‘Are we weather persecuted?” she said. “What will happen next?’ It’s almost absurd.”