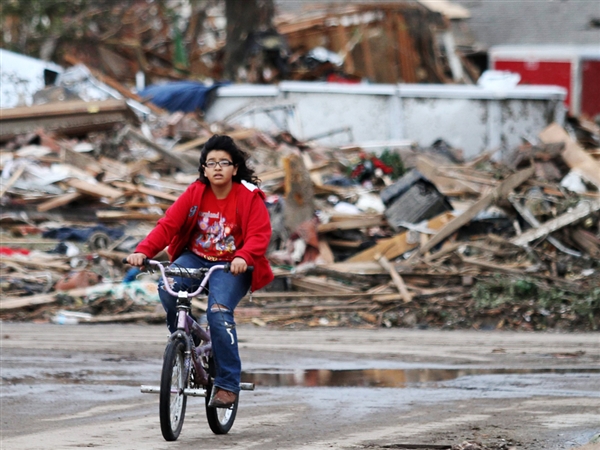 The tornado in Moore, Oklahoma has now been upgraded to a rare EF5. Tornadoes of EF5 intensity have top winds of over 320kph on the Enhanced Fujita Scale.

The survey team from the National Weather Service in Norman, Oklahoma found at least one area with EF5 damage near Briarwood Elementary. Preliminary survey results also show that the tornado path length was 27kms long and up to 2.1km wide. Winds were estimated to be 320-340kph in the area with EF5 damage.

This is the second time in the past 15 years that Moore has been hit by a tornado of similar intensity.

On May 3, 1999, an F5 tornado caused massive destruction in this southern suburb of Oklahoma City.

Note: The Fujita Scale was altered in 2007 and became the Enhanced Fujita Scale. This is the reason for the mix of F5 and EF5 ratings you see.

How Rare Are EF5/F5 Tornadoes?

According to the Storm Prediction Centre, the US has seen a total of 59 tornadoes with this top rating since 1950. This includes the May 20, 2013 Moore tornado.

Eighteen states have experienced an F/EF5 tornado since 1950, as far east as Ohio and as far north as North Dakota. Alabama and Oklahoma lead the way with seven “5-rated” tornadoes, followed closely by Texas, Iowa and Kansas with six such tornadoes each.

While the long-term average is just under one F/EF5 per year, there have been years with more than one, but also multi-year stretches without a single one.

The “Super Outbreak” of 1974 had an incredible seven F5 tornadoes in just one 24-hour period! Conversely, the US went 8 years without a single “5-rated” tornado after the Bridge Creek-Moore, Oklahoma 1999 F5 tornado before there was another, the EF5 Greensburg, Kansas wedge tornado.

In 2011, there was another active year of these high-end tornadoes. Six EF5 tornadoes touched down in April and May combined, the most “5-rated” tornadoes in any year since 1974. This included two EF5 tornadoes in Mississippi and two in Alabama during April. In May, Joplin, Missouri and El Reno/Piedmont, Oklahoma were struck by EF5 tornadoes.

When looking at all rated tornadoes, Severe Weather Expert Dr. Forbes finds that only one percent of all tornadoes are “violent” tornadoes, rated F/EF4 or higher. The large majority of tornadoes are classified as “weak” (That said, winds in EF0 and EF1 tornadoes can still produce damage and are still dangerous.)

Can You Survive an EF5?

First, a caveat. It’s difficult to tell if a tornado is truly an EF5 by simply looking at it. However, there are days when the atmospheric ingredients combine to favor long-track supercells with violent tornadoes.

Dr. Forbes says you can survive “particularly if you have a basement or an in-house shelter, so that the house may fly away above or around you, while you remain.” Forbes says, “In the 1985 Pennsylvania-Ohio outbreak, about 3 of every 4 people whose structures were hit by F4 or stronger winds survived.” The survival rate is higher for those following the proper procedures.