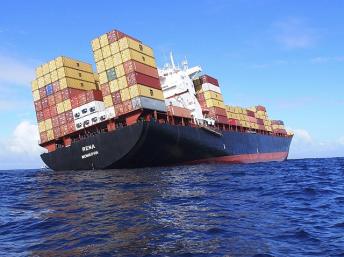 Oil spilled from a stricken container ship off the Tauranga coastline has started washing up on shore at Mt Maunganui, reports say.Media reporters had spotted oil from the Rena, which is stranded on the Astrolabe Reef, on the Mount Main Beach near Leisure Island this morning. Earlier bad weather halted efforts to pump 1700 tonnes of oil from the stricken container ship. Crews aboard the barge ‘Awanui’ had pumped 10 tonnes of oil from the Rena since 8:30pm last night. They were called off this morning due to safety concerns amid “changing weather conditions” at the reef. Maritime New Zealand (MNZ) said the urgent salvage operation had to be stopped if there were any fears for the safety of the 25-strong salvage team on board Rena.It said the salvage operation at the Rena was urgent and said the crews were looking to resume pumping soon. NewztalkZB and NZHerald