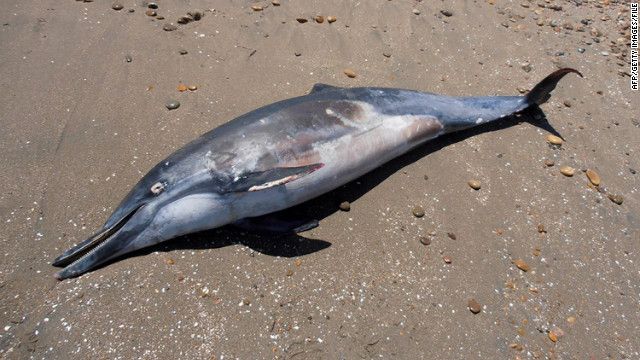 Hundreds of dolphins that washed up on Peruvian shores died of natural causes, a government official said in a radio interview Tuesday.

“One of the things that we can confirm is that…the deaths of the dolphins were not caused by any human activity, and this is a very important subject,” Peruvian Production Minister Gladys Triveno told RPP Radio.

Government investigators have also ruled out theories that a bacteria or virus could be behind the deaths, she said, adding that further details would be revealed in a report from the Sea Institute of Peru scheduled to be released Tuesday.

“It is natural causes. It is a natural death, and also the report explains the process of natural selection, let’s say that the species that are more prepared, the dolphins that are more prepared, are those that are going to survive,” Triveno said. “And this happens periodically. This is not the first time it has happened. And it is not only happening in Peru, but also has happened in New Zealand, in Australia, in other countries where these phenomena happen.”

A spokesman for the institute told CNN Tuesday evening that its report had not yet been released.

The appearance of nearly 900 dead dolphins in a 220-kilometer (137-mile) area in northern Peru so far this year, and the deaths of thousands of pelicans there and in neighboring Chile, have sparked concern among local residents and environmentalists.

At least one Peruvian environmental group has said loud sounds from nearby oil exploration could be to blame for the dolphins’ deaths.

“We see that in their bodies there are air bubbles caused by heavy pressure. These animals are underwater holding their breath, facing a sudden and violent noise, these animals release nitrogen and this forms the bubbles that end up destroying living cells,” Carlos Yaipen-Llanos of the Scientific Organization for the Conservation of Aquatic Animals told CNN en Español earlier this month.

Government officials have dismissed that assessment, arguing that it is not supported by evidence.

Earlier this month, Peruvian authorities said warm waters off that country’s coast were to blame for the deaths of more than 5,000 marine birds.

The Peruvian ministry of environment said seafood is still safe to eat, and encouraged everyone to continue to support local fishermen, according to state-run Andina news agency.

The dolphin deaths in Peru mark the third set of high-profile strandings in the past several months.

In February, 179 dolphins –108 of which were dead — washed ashore in Cape Cod, in eastern United States, according to the International Fund for Animal Welfare. Marine biologists are still trying to determine the cause of those deaths.

In early March, amateur video taken from a beach in Rio de Janeiro, Brazil, showed more than 30 dolphins on shore. In that instance, all dolphins were safely returned to the sea.