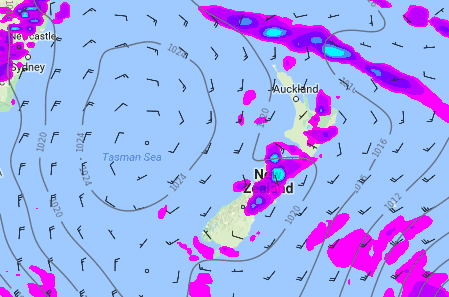 High pressure is moving towards New Zealand this weekend but it’s by no means a perfect set up for everyone.

On Saturday a slightly cooler sou’west wind flow will cover most of the country. This will encourage just a few showers around the South Island, mainly in Southland and perhaps Banks Peninsula. A few isolated downpours may also form through inland Canterbury near the hills later in the day which will no doubt be welcome by most fortunate enough to receive it.

The North Island looks fairly dry on Saturday but we can’t rule out a few early showers around Northland and maybe Auckland. Later in the day a shower is also possible around the southern and eastern side of the North Island.

Across Saturday high pressure will be gradually building from the west.

On Sunday the hit and miss Canterbury downpours will have moved north into the Hawke’s Bay/Gisborne areas with a few heavy downpours expected around here on Saturday morning.

With high pressure building and winds light these downpours may linger – and even spread into the central North Island from the east. This may mean downpours pop up west of Hawke’s Bay and Gisborne towards the likes of Rotorua, Taupo, King Country and other parts of Waikato. Not locked in, but possible.

Meanwhile on Sunday the centre of this incoming high should be smack bang over the top of North Canterbury and therefore the South Island and lower North Island where it will be mainly dry and calm – but perhaps still a bit cloudy.

The final day of October 2016 is this Monday (Halloween) – conditions look mostly dry and calm nationwide with high pressure dominating both islands for the day.