‘Occupy’ demonstrators battle wind and cold as storm moves in 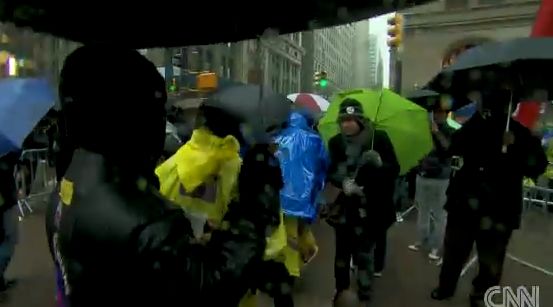 Demonstrators encamped in a Lower Manhattan park faced New York’s first snow storm of the season Saturday without the benefit of propane tanks and generators that they had been using to cook food and keep warm.

“It’s pretty dirty, and we’re all freezing cold,” said Alec Courtney, who says he runs a shoe-shine stand at the city’s Zuccotti Park to make money. “We just try to huddle together.”

Courtney, a resident of the New York City borough of Brooklyn, says he’s been camping at the park for the past 20 days and plans to stay there — despite the inclement weather — to support “the cause.”

The group has rallied against what it describes as corporate greed while asserting that the nation’s wealthiest 1% hold inordinate sway over the remaining 99% of the population.

A day earlier, up to 40 firefighters removed the group’s propane tanks and six generators, New York Mayor Michael Bloomberg said. That left the demonstrators to battle the cold weather seeping through their tents, blankets and sleeping bags.

“These are fire hazards (and) against the law,” Bloomberg said during his weekly WOR-AM radio show Friday. “Our first concern is safety.”

Demonstrators described the removal as an attempt to restrict Internet use and make their lives more difficult as a cold front moved into the region.

The early season snowstorm was the result of unseasonably cold air mixing with a storm system on the East Coast. Forecasters predicted power outages and downed trees in some areas.

Zuccotti Park — the Occupy Wall Street movement’s original home base in the city’s financial district — appeared soaked and windswept by late Saturday afternoon, as protesters battled the elements and huddled inside tents to keep warm and dry.

Despite such challenges and recent crackdowns against demonstrators nationwide, the loosely defined “Occupy” movement does not appear to be losing steam.

Protesters there tried to occupy the Colorado Capitol, which is not allowed, and officers pushed them back, police spokesman Matt Murray said.

At that point, officers moved toward an encampment to remove tents that had been set up illegally, he said. One officer was knocked off his motorcycle and injured, while two others were kicked in the head during the ensuing melee, according to Murray. Seven people were arrested.

“All we’re trying to do is have a peaceful protest and they (the police) are attacking us,” protester Sean Drigger told CNN affiliate KUSA.

In Seattle, protesters marched through the city and set up camp at Seattle Central Community College, what they described as their new base.

In Nashville, Tennessee, authorities arrested more than two dozen protesters overnight Saturday, after they again defied a curfew imposed by the state’s governor.

Twenty-six people received citations for trespassing, while two others were cited for public intoxication, according to Tennessee public safety spokeswoman Dalya Qualls.

One other person was handed a citation for criminal impersonation of a law enforcement officer, she said.

On Thursday, Oakland, California, Mayor Jean Quan apologized for authorities’ confrontations with demonstrators, who were tear-gassed. The clashes led to the hospitalization of an Iraq war veteran.

Marine veteran Scott Olsen suffered a skull fracture Tuesday night after allegedly being struck by a tear gas canister in Oakland, according to witnesses.

Olsen has become an icon of the “Occupy” movement, which remains active from coast to coast.