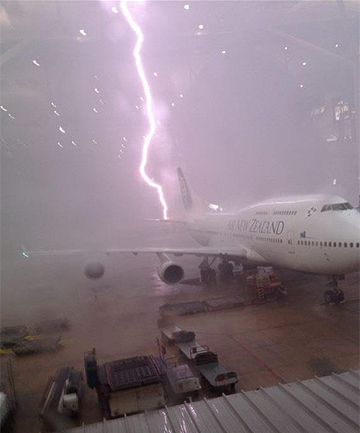 In New Zealand the number of thunderstorms vary depending on the time of the year but also the location.
Western areas tend to see way more thunder action than their eastern neighbours but occasionally eastern parts get a real belter.

In winter the air is heated when very cold air from near Antarctica moves north over the relatively warm sea around New Zealand.
In summer the land is heated by the sun which, in turn, heats the surface air.
Spring thunderstorms are often a combination of both patterns.
Summer and spring thunderstorms are more likely to occur in the afternoon and evening. In autumn and winter they can occur at any time.

The strong updraughts inside thunderstorm clouds separate ice particles and cloud droplets according to size, carrying the smaller ones higher in the cloud. Since the smaller particles tend to carry a negative electric charge and the larger particles a positive charge, a strong electric field builds up inside the cloud. The electricity is ultimately discharged in a flash of lightning. Monitoring equipment has shown that over 50,000 lighting strikes hit New Zealand each year.

In a thunderstorm with rain at a rate of 50 millimetres an hour, the energy released in one hour is equivalent to the power demands of an average household for about 8,000 years.

Where to find lightning

Lightning strikes are more frequent about and west of the main ranges, especially in the west of the South Island. This is because airstreams from the westerly quarter are far more common over New Zealand than those from other directions. Storm clouds approaching from the west usually drop all their rain as they rise over the mountains. Little remains of the cloud when the air descends on the eastern side.

Some thunderstorms occur just ahead of cold fronts and others are in the deep pools of cold air that usually follow several hundred kilometres behind the fronts. Often, these fronts weaken as they approach the North Island, and the cold pools more often track across the South Island than the North.

Lightning strikes are more common in summer than in winter, but the winter strikes usually have a stronger current because of the greater instability of the cold Antarctic air in which they develop.

Bolt from the blue

In 2002 Paul Martin was running to avoid heavy rain. Suddenly he heard a loud bang and then saw a bright flash. Thinking he was on fire, he dropped into a gutter full of water. Lightning had entered through his back and gone out through his eye. He experienced brief heart complications, a graze on his back and some damage to his left retina, but survived the ordeal.

In New Zealand, lightning kills someone about once every 5–10 years. Lightning is not only hazardous as a direct strike; it can also travel a long way down electricity supply lines, telephone lines and fence lines. It has even travelled through water pipes and into metal sinks.

The very strong updraughts inside thunderstorms carry liquid cloud droplets rapidly up to levels where the temperature is well below zero, and hailstones can form. The updraughts can lift the hailstones higher until they grow so big that they begin to fall.

The most frequent hailstorms occur in western areas in winter and spring. But if only severe storms with large hailstones are considered, then the greatest frequency is in eastern districts in spring and summer. Storms that produce small hailstones often affect large areas, but the most severe storms have a narrow path of destruction.

In New Zealand, hailstones as large as cricket balls have been reported, although they are rare. Golf-ball sized hail is more common and can do millions of dollars worth of damage to crops and fruit trees. Although hail is often spherically shaped, it sometimes has sharp knifelike projections. Such hail has been known to slice through apples, leaving half the fruit on the tree.

Hail has killed many different types of animals in New Zealand including dogs, rabbits, sheep, chickens, ducks and seagulls, but so far no people have died, although some have received head wounds requiring stitches.