NZ rockets up, up and away 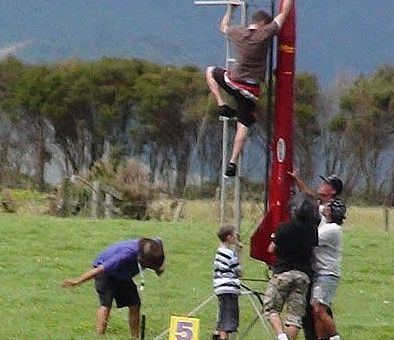 The New Zealand Rocketry Association (NZRA) is a group of people who are interested in model rocketry, who build model rockets, and launch them skywards.

A couple of weeks ago Joel Schiff from the NZRA contacted WeatherWatch.co.nz about a weather forecast for launching their rockets.  Unfortunately sky conditions weren’t ideal at the time but the following weekend all systems were go and they managed to launch a rocket to 33,701 feet.  This is the height 737s often fly at. 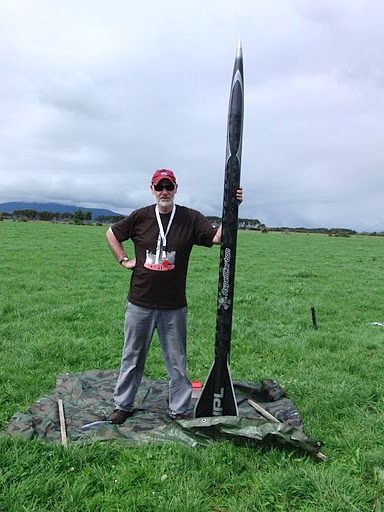 Image / Joel and his rocket – which was successfully recovered by parachute completely intact after reaching over 33,000 feet.

The rocket is 98 mm diameter, 2.6 metres length and made of carbon fibre.

The one metre long solid propellant motor is an Aerotech N1000, one of the largest commercially available rocket motors in the world. It contains a composite propellant made of ammonium perchlorate, potassium nitrate, aluminium powder, and a rubbery binder substance. It is the same type of propellant that is used in the Space Shuttle solid rocket boosters.

Two on-board computers (one is for backup) control the deployment of a small drogue parachute at apogee (the maximum altitude), and a main parachute at 1000 ft. The computers also keep track of the altitude, velocity, and acceleration at all times during the flight. The three sections of the rocket are tethered together so that all the components will come down together. The maximum velocity reached was mach 1.5 (i.e. 1.5 times the speed of sound) and the maximum acceleration was 10g’s so that all on-board components experienced 10 times their normal weight.

The rocket had an on-board tracking device connected to the GSM cellular network that sent a text message of its location at various times throughout its flight. Once the rocket landed, it was retrieved by a local farmer 2 days after it was overlooked by 6 people scouring his farm for it.

The rocket is a joint collaboration between NZ Rocketry Association members Joel Schiff and Martin Aspell (both of whom live in Dairy Flat) who have been working on the rocket for the past 18 months. It had made two successful test flights, the last one being over 10,000 ft. On Sunday, 20 February from the NZRA launch site in Taupiri (near Huntly) the rocket achieved an altitude of 33,701 ft (10,275m) which will set a new New Zealand high-altitude record once approved. No doubt, others will attempt to go higher in the future.

One of the main concerns is the jet stream winds as well as the lack of oxygen at high altitudes which hinders the detonation of the ejection charges for the parachutes. Moreover, CAA approval has to be sought for the exact time of the launch event so that the upper airspace is clear of any aircraft.

“Getting the rocket up there is one thing, but getting it back down again and finding it is quite another.”…. Joel Schiff 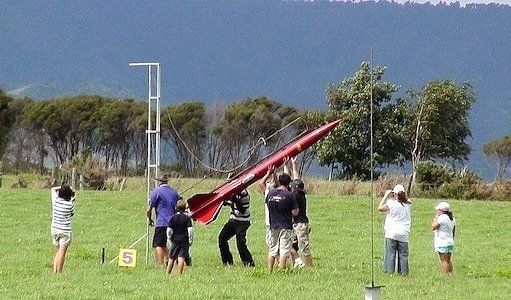 Ages can range from 6 to 106 and the NZRA is open to everyone who wishes to join us. The NZRA has been in existence in various forms since 1991 when it was called the NARNZ (National Association of Rocketry New Zealand):