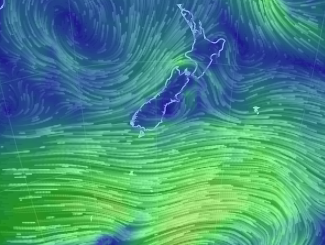 It’s a little windy for some, a little cloudy for others, maybe a little cool for a few too – but generally speaking the weather across New Zealand this weekend is fairly average for October – and it’s minus any severe weather.

There are a couple of very light isolated showers around the eastern Tasman Sea in the Auckland and Northland regions.

A few light showers are also affecting the West Coast.

At the moment the animated wind map on the WeatherWatch.co.nz homepage shows New Zealand ‘parked’ between busy weather traffic.

Just to the south of Stewart Island, in the Southern Ocean, runs a large ‘motorway’ of westerly gales at the moment.  In the Tasman Sea a large anticyclone ’roundabout’ is blowing some wind into NZ, it’s taking an exit through the Cook Strait offramp with winds gusting to 50km/h in Wellington. And it’s this backwards roundabout of anticyclonic wind that’s driving in plenty of cloud and a few very light showers to the Auckland/Northland/Waikato western regions this morning.

So the windiest weather is to the south of New Zealand, the wettest is well to our north east and sunniest/calmest well out to our north west. New Zealand is parked far enough away from all of these systems, it’s a bit like we’re at a red light waiting for something to change….and when the light turns green which moves in first? Most likely the motorway of gales will shift north up and over southern and central New Zealand on Monday and Tuesday.

So Sunday should be another day like Saturday – parked between all the systems, before winds accelerate further again early next week.