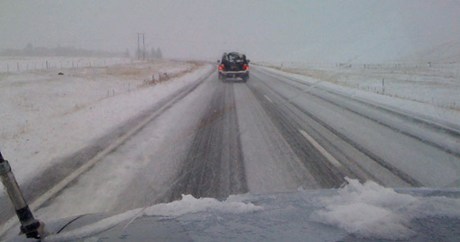 Conditions have deteriorated across parts of the North Island this morning with some regions bracing for gales at some point today/tonight, over southern and eastern areas, after snow and flooding caused problems in the South Island yesterday.

Snow fell to 200m in parts of inland Canterbury and Otago yesterday, catching out more than 100 motorists when Burke’s Pass on State Highway 8 had to be closed.

Tekapo fire chief Craig Willis said firefighters and ploughs helped to clear snow up to 50cm deep on the pass near Lake Tekapo, about 200km south of Christchurch, yesterday afternoon.

At least 100 vehicles waited for the pass to reopen, while firefighters helped to free vehicles that got stuck in the snow or went off the road.

The wet weather also caused flooding in Southland, where officials were keeping a close eye on the swollen Mataura River.

The river peaked as expected in Gore yesterday evening at almost 3.2m higher than usual.

Environment Southland duty flood warning officer Stacey Stuart said while the Mataura River had the highest levels, most rivers in Southland were also higher than normal.

Some roads were closed and people needed to be vigilant over the next couple of days.