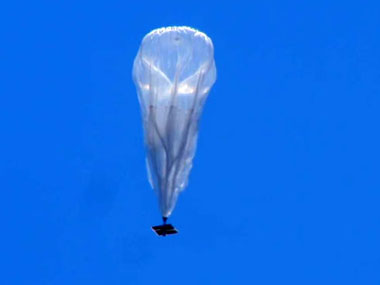 New Zealand has reached for the sky, backing Google’s extraordinary plan to encircle the Earth with helium-filled balloons beaming internet access to billions.

“I’m absolutely amazed,” said Professor Jean Fleming from Otago University’s Centre for Science Communication. “I’m boggled by the audacity of it, in a good way.”

Fleming said most people would welcome Project Loon, although some would be concerned about possible abuses of the technology. “There’ll be a whole lot of people asking questions about surveillance.”

Fleming said Christchurch’s experience with the 2011 earthquake made it a fitting place to launch the project, which Google says should benefit disaster-struck regions.

Project Loon’s creative team included New Zealander Dr Craig Nevill-Manning, who studied computer science at the universities of Canterbury and Waikato. He is now Google’s engineering director and was pivotal in creating Google Maps. He lives in New York but visits New Zealand often and spent last summer on Waiheke.

His wife Kirsten is Facebook’s head of recruitment.

Google hoped the helium-filled balloons, soaring on stratospheric winds, would ultimately connect billions of people in rural and undeveloped places to the internet.

Telecommunication Users Association chief executive Paul Brislen said the project was “tremendous” and could have far-reaching consequences for consumers. “Solar panels have dropped hugely in price. And Wi-Fi is cheap and cheerful.”

Brislen said the distance from the ground to the satellite and back down again meant there could be some delays. “That’s only a problem if you want to do real-time stuff like audio calls. If you’re just downloading a movie or wanting to send an email, it’ll be fantastic.”

He said people in remote areas “feeling left out of the loop” could gain web access for the first time, and quite cheaply.

Christchurch Mayor Bob Parker said he was proud the city was the first place on the planet to showcase the new technology. Project Loon could help aid organisations, he said.

Google is building ground stations connected to local internet infrastructure, which beam signals to the balloons. The balloons communicate with each other, forming a “mesh” in the sky. Solar panels beneath the balloons power radios, antennas, altitude controllers, and a flight computer.

The balloons are made of plastic only 3mm thick. They are 15m round when fully inflated but only inflate on reaching float altitude, some 20km above sea level. The balloons float twice as high as most airline flight paths. The Civil Aviation Authority is informed of launches.

Fifty pilot testers in Canterbury have antennas that connect them to the internet when the balloons are within a 20km radius of their homes.

Herald on Sunday and WW

Sounds a great idea, but wouldn’t strong winds affect them as they are so light?

A good point you make and apparently they can sail up into 25kph breezes but no more.