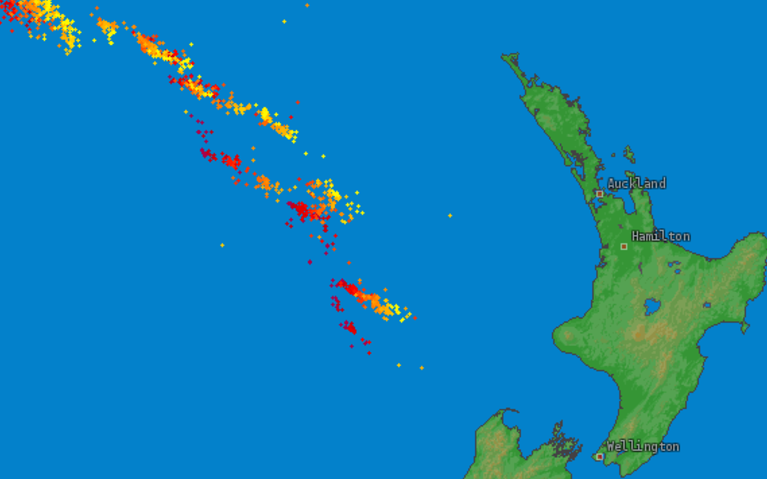 Weather over the next several days in New Zealand will be typically spring-like, but that may not be the news you’re wanting as rain, gales and even snow are forecast before the start of next week.

With a large area of low pressure around the Southern Ocean and southern South Island – coupled with high pressure well north of New Zealand and over Australia – our nation is stuck in a several day rut of wind and rain. That also means some are sunny and dry though, as is the nature of a true spring set up.

RAIN:
Focused mainly in the west of both islands it means the West Coast, Nelson, Taranaki, Manawatu, Waikato and Auckland are all exposed to more rain, with heavy falls and isolated thunderstorms (the Live tracker is quite active west of the North Island).

The West Coast of the South Island is most likely to have many hours (days even) of set in rain, while the North Island will have rain clouds more broken up along with dry spells, showers and even sunny spells.

As these lows remain churning around southern New Zealand and the Southern Ocean we can expect surges of rain in the west over the next 24 hours, then perhaps again on Thursday, with brief breather on Friday before more rain over the weekend. By Sunday the air flow turns southerly and rain in the west finally fades out. This southerly change may see a bit of weather wet moving into eastern regions of both main islands.

WIND & POLLEN/ALLERGIES
A typically blustery spring week ahead with westerly quarter winds becoming strong at times – but not damaging for the most part. This wind event will be annoying for some, frustrating for others, and help lift pollen levels (by shaking spring pollen from trees and carrying the allergens in the air – creating for more sneezing!). We don’t expect winds to be strong enough to cause issues for most travellers.

Winds will surge off and on from the westerly quarter over the next several days and will become colder as we head into the weekend and they turn more southerly.

SUN:
With such blustery westerlies and the bulk of the rain (90% of it) falling in the west it should make for sunny/dry weather in eastern areas for the most part. There will be spits of rain spilling over from the west at times, and a few bursts of rain or showers during the main fronts. But the general trend is for eastern areas, like Hawke’s Bay and Canterbury, to be fairly dry near the coast. Eastern Northland and the Far North may also have more settled weather (less wind and rain overall).

WARMTH:
With windy westerlies temperatures can really fluctuate. The air flow around the North Island will be warmer than the South Island so expect places like Hawke’s Bay to reach the low to mid 20s on Wednesday under the nor’wester. Highs in the late teens/around 20 are expected in the east of the North Island all week, before dropping back this weekend as winds shift more southerly.

The east of the South Island also looks mild to some degree, but highs over 20 degrees look less likely. Frost free weather is expected in the east though. Christchurch has overnight lows between 3 and 7 degrees over the next week.

Western and northern areas will have fairly flat temperatures with a lot of cloud about and air coming off the Tasman Sea, so it won’t be as warm as those in the east but the overnight temperatures will be well above average. Waikato can have some pretty big frosts in early September but double digit overnight lows for much of this week means frosts won’t be a concern.

COLD AND SNOW
Colder weather arrives at the weekend and into Sunday and Monday for many areas. Temperatures drop quite a bit. For example Hamilton has an overnight low of 12 degrees tonight. On Sunday that is the forecast high for Hamilton City at this stage. Wellington may only reach 11 degrees on Sunday while Dunedin has a high of 8.

Over the weekend Queenstown has highs of just 5 degrees and overnight lows down to -2 with snow flurries in the area. Snow doesn’t look to be major for farmers at this early stage, it seems a mostly short snowy event for the ski fields but may bring 24 to 36 hours of stressful wind-chills for newborn stock and snow flurries down to a few hundred metres for a time. 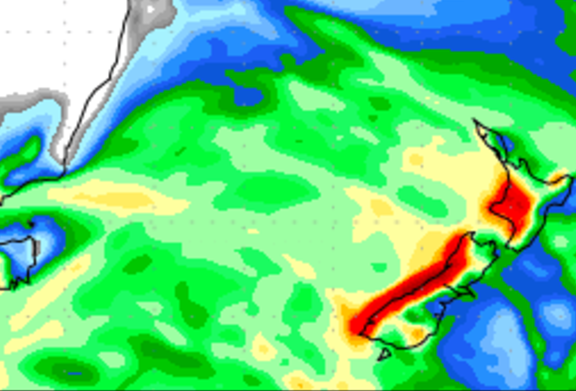 Where will the heaviest rain be? Areas in red show a wetter than average forecast while areas in blue indicate drier than usual / US Government, US Taxpayers.